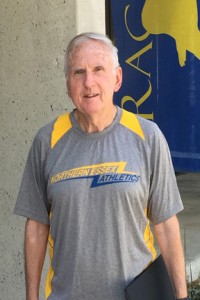 Thom Bradley was nearly 28 when he discovered the merits of running. Now, 38 years later he is sharing those merits with students at Northern Essex Community College as he works to resurrect its cross country team.

Though NECC hasn’t offered cross country since 2007 and there are just a half dozen committed runners to the program, the Haverhill resident (formerly of Andover) is confident that with his own running history and coaching experience he will successfully grow the program.

A native of Brooklyn, NY, Bradley graduated from the Military Academy at West Point. He served five years active duty as a captain in the U.S. Army before settling into domestic life on Long Island and working on Wall Street. During one of his daily commutes he happened upon a “Runner’s World Magazine”.

He was hooked before he went for his first run. Prior to reading the running magazine, Bradley’s only true exposure to or interest in running had to do with the army’s timed mile. Running shoes were alien items to Bradley… until he purchased his first pair and laced them up.

The alien became the ordinary as he incorporated running into his daily routine. Running shoes became a staple in his wardrobe. Bradley quickly became active in road racing, and eventually ran a dozen marathons. His first race was a half marathon.

“I knew I was in deep when I ran 52 races from March to November one year,” he said.

Bradley redirected his interest in the sport, as his banking career was coming to a close. After more than 20 years in the corporate world, at the age of 48, he accepted a position coaching cross country, winter track, and spring track at Wilmington High School. He enjoyed it so much he took part-time positions in ad services and corporate security to accommodate the afternoon practices. After 18 years, he retired again, but didn’t hang up his running shoes. He accepted the position of track coach at the Presentation of Mary Academy in Methuen.

When the position for a cross country coach at NECC was posted, Bradley was interested. When he learned he would be reigniting the program he was all in.

He is now recruiting current and new students who may be interested in running cross country.  Students interested can reach him at tbradley@necc.mass.edu

As a result of his years of running and coaching, Bradley says his coaching style has evolved to what he calls “laid back”.

“I encourage the students to do as well as they can. It’s important to boost their morale and make the sport fun,” he says.

Bradley admits to changing up the practices to break the monotony. He has been known to incorporate what he calls a “timed celebrity scavenger hunt” complete with signs posted on the practice route, barefoot runs, and hurdle walking.