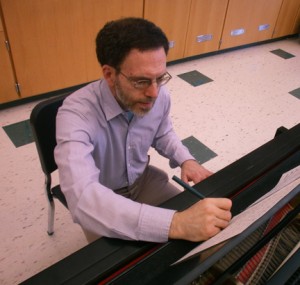 Northern Essex Community College English faculty member Lenny Cavallaro has had a productive year on both the literary and musical fronts.  He has written several interviews, a short story, and a novelette. Cavallaro also had a number of musical compositions published.

Perhaps most exciting of all, according to Cavallaro, has been his conjectural “completion” of “Contrapunctus 14” from Bach’s unfinished masterpiece, “The Art of Fugue”.  Simone Stella, the internationally renowned organist, recorded both that and Cavallaro’s “Fugue in G Minor.”

Forton Music, a British publisher, released Cavallaro’s “Four Romances for Cor Anglais (English horn) and Piano, Op. 6” and his “Suite for Oboe, Cor Anglais, and Bassoon, Op. 7” in late 2014, and then his “Sonata #2 in E Minor for Oboe and Clavier, Op. 8” this summer.  Recordings of these works, as well as the organ compositions, have all been posted on YouTube.

Cavallaro says, “If I wish to teach English, I must continue to write.”  His interview with Pinchas Zukerman was published by “Stay Thirsty Magazine” and made the “Stories We Like” list of “Classical Voice North America” (the journal of the Music Critics Association of North America).  He has also published a short story, “Bach’s Last Composition:  A Fantasy,” a highly fictitious narrative loosely based on “The Art of Fugue”.

Cavallaro’s last effort of the summer was a novella about the mysterious death of former world chess champion, Alexander Alekhine titled “Sherlock Holmes and the Murder of Alekhine”. It is is available in digital format on Amazon.

Cavallaro earned his Doctor of Musical Arts (D.M.A.) degree from West Virginia University, and has served on the music faculty of several colleges.