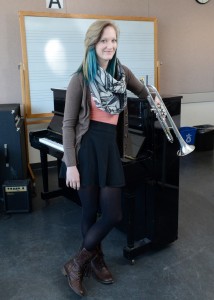 Northern Essex gave Lindsey Michaud the opportunity to earn an associate degree while doing what she most enjoys – playing her trumpet.

The Lowell resident, who has played the trumpet since she was 10 years old, was an honors student when she graduated from Lowell High School in 2012. College was always in her plan because she wanted to be a music teacher.

Initially, NECC wasn’t part of that plan. When she was 14, Lindsey saw the Umass Amherst Marching Band perform and it made a lasting impression. One day, she told herself, she would march with that band, but following high school graduation, because of money constraints, she learned that “one day” would have to wait.

Instead, Lindsey attended another community college for two semesters. A chance trip to the NECC campus with her older sister however, changed everything.

“I saw the music class selection Northern Essex offered and I said ‘I have to transfer there’,” she says.

For the last two years Lindsey has built her academic resume. She graduated with an Associate Degree in General Studies: Music Option in May ’15. In addition to earning a 3.66 GPA, she regularly performed with NECC’s popular jazz rock ensemble which gave her the opportunity to play at Northern Essex and community functions. She was also co-founder and vice president of the fledgling NECC Music Club.

“I always talk up the music program here” she says. “My favorite thing about the program is that you can take so many music related courses. There is a course for whatever interests you and it is just so affordable here.”

In the fall, “one day” arrives when Lindsey transfers to UMass Amherst under the MassTransfer program and enrolls in the Music Education Program. She hopes to march with the school’s marching band.