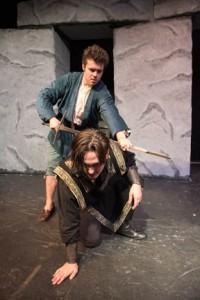 Christian Doyle of Newburyport takes on the role of Edgar and Daniel Burns of Methuen is Edmund in the Northern Essex Community College production of King Lear presented next month in the Chester W. Hawrylciw Theater on the third floor of the Spurk Building on the Haverhill campus.

The miseries and joys of humanness are explored in the Northern Essex Community College production of “King Lear,” presented this month in the Chester Hawrylciw Theatre on the third floor of the Spurk Building on the Haverhill campus.

“The play ‘King Lear’ encompasses all of society from the exalted monarchy to the lowly beggar,” says Theater Professor Jim Murphy, who takes on the role of Lear. “The play explores the journey of man through life and deals with the extreme emotions of tenderness, anger, anguish, and despair experienced in the journey. The play shows both human cruelty and misery along with goodness, loyalty, devotion, kindness and self-sacrifice. In short, what it is to be human.”