Track Star Takes on Role of Track and Field Coach 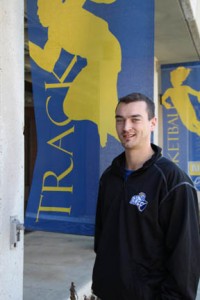 NECC’s new track & field coach Michael Giardina of Lowell is looking for new talent for both track and field events.

When Michael Giardina was a sophomore at Lowell High School, he joined the track and field team to cross-train for his favored sport – wrestling. Quickly, however, the track replaced the mat and now seven years later Giardina is sharing his track and field prowess with Northern Essex Community College students as the newly appointed men and women’s track and field coach.

The 24-year-old Lowell native is looking to reinvigorate the lapsed program. He has been actively recruiting and already has close to two dozen students who have attended track and field open houses or expressed interest in joining the team.

Track and field team members, he says, can expect an easy but dedicated style of coaching.

“I’m definitely about team building,” he says. “I think the students work better when there is a strong sense of team. I’m friendly, but I’ll definitely expect team members to be dedicated and show effort.”

It wasn’t so long ago that Giardina was on the other side of the whistle. A stellar cross country and track and field performance in high school earned him a scholarship to UMass Amherst, where, he served as captain. He says he worked closely with the coaches developing strategies, implementing training plans, and providing motivation to his teammates.

Today, Giardina is just a class away from earning his Bachelor of Science in Kinesiology with a minor in educational studies, a major that was dictated by his desire to one day be a college coach.

In addition to finishing his degree and coaching the NECC track and field team, Giardina substitute teaches at Lowell High School.

While teaching may seem like an obvious choice long term, he says, he has not ruled out fire fighter /EMT where he could employ his knowledge of the human body.

For now, he says, he is totally committed to expanding the NECC track and field team. He encourages anyone who has in interest in track to contact him at mgiardina@necc.mass.edu

“I’ll always be looking out for the best interests of the individual as both athletes and students,” he says.