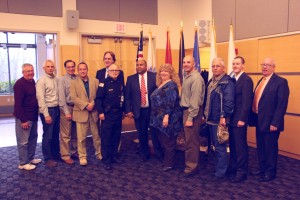 Lawrence Mayor Dan Rivera was the keynote speaker at the luncheon, sharing his experiences as a military police officer in the U.S. Army.

Rivera joined the military following his graduation from Lawrence High School. After serving in Germany, he was deployed to Kuwait and Iraq during Operations Desert Storm and Desert Shield.

He said that while in the military he learned that if you have a tough job to do you need to find someone dependable to do it, which is something he remembers and uses every day as mayor of Lawrence.

Rivera also described what it’s like to serve far away from home.  “No iPads, no Cool Whip, definitely no cold beer, and people are trying to hurt you,” he said.  “The only thing you really have are your colleagues.”  He urged the audience to think about the sacrifices of our soldiers, and “the next time you see a veteran; thank them for their service.” 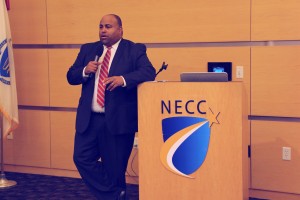 Rivera also related to veterans who had enrolled in college after serving.  He started taking college courses while stationed in Florida and, as a result, he was able to complete his bachelor’s degree at UMass Amherst in just three years after leaving the service.  “I wouldn’t have been able to pay for college if it weren’t for the GI Bill.”

Bill Heineman, vice president of academic and student affairs, gave the welcoming remarks at the luncheon.  “I started as a history instructor and I have always been interested in military history,” he said.  “I am awed by the dignity and professionalism of our military.”

Northern Essex currently has 130 students who are veterans or have ties to the military enrolled at the college, and that number has been growing in recent years, a trend that makes Heineman proud.  “We had our first orientation especially for veterans this year and we’re developing a veterans’ peer to peer program,” he said. “The college was also recently named one of the best colleges for veterans by Military Times earlier this week.” 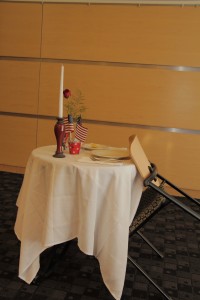 John Caswell, president of the NECC Veterans & Servicepersons Club, a student club, served as the master of ceremonies and described the fallen soldier table which was set up in the corner of the room with dinner service set for one and a single red rose in a vase. Filled with symbolism, the Fallen Soldier Table acknowledges those killed in action, prisoners of war, and those listed as missing in action.

Northern Essex offers a Veterans & Services Club for students as well as a Veterans’ Writing Group which Professor Paul Saint Amand leads.  To learn more about opportunities for veterans at NECC, visit the website.

Veterans with questions regarding educational benefits, funding resources, and prior credit and/or transfer opportunities, can contact Jeff Williams, NECC’s veterans’ services coordinator, at 978 556-3631 or jwilliams@necc.mass.edu.