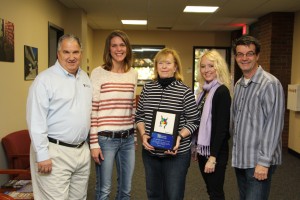 Maggie Lucey, staff associate in the Northern Essex Community College Office of the Vice President of Administration and Finance, was honored by Opportunity Works at its annual meeting which was held recently at the Atkinson Country Club.

Lucey received the Ambassador of the Year Award from Opportunity Works, based on her involvement with Project SEARCH, an internship program for adults with cognitive disabilities.

Opportunity Works is a Newburyport-based organization that provides work opportunities and services to people with disabilities throughout the greater Newburyport region.  It recently opened a new facility in Haverhill, across the road from NECC’s Haverhill Campus.

Northern Essex became a host site for Project SEARCH in July of 2014. Since then, two groups have completed internships at Northern Essex and a third group just started.

According to Jamie Nadeau of Opportunity Works, Lucey is passionate about spreading the word about Project SEARCH and has been instrumental in the success of the program at Northern Essex. “Through her advocacy and support, interns have had the opportunity to work in 15 different departments throughout the campus,” said Nadeau.

Project SEARCH is an international program that began at Cincinnati Children’s Hospital in 1996. Since its inception, Project SEARCH has grown from a single program site to over 300 sites across the United States and Canada, England, Scotland, Ireland, and Australia. Project SEARCH’s primary objective is to secure competitive employment for people with disabilities.