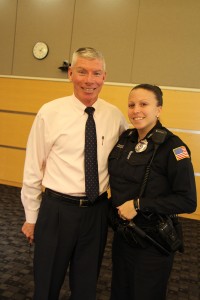 Thomas Fleming, director of the NECC Methuen Police Academy and Officer Tiffany Maldonado of the Haverhill PD. Tiffany was in the first class to graduate from the academy

Northern Essex has been preparing students for careers in a wide variety of fields for over 50 years, and the college recently stepped up its involvement in the training of local first responders.

Last February, the NECC Methuen Police Academy opened on the college’s Haverhill Campus and this fall the Essex County Sheriff’s Department began renting space, also on the Haverhill Campus, for its academy.

NECC President Lane Glenn opened the event with an overview of the college’s role in public safety training.

President Glenn shared that although it’s less common in Massachusetts, 85* of first responders nationwide, including police, firefighters, and paramedics, are trained at community colleges.

Collaborations between public safety providers and community colleges can lead to better educated first responders, according to Glenn. “We can’t eliminate the incidents of violence that have taken place across the country, but better training can help reduce those incidents.”

They can also help provide a safer campus, said Glenn.  “Academies provide a very visible police presence and can be comforting and an effective deterrent to crime.”

Glenn said that future goals included adding a credit component to the academies, allowing recruits in the academies to earn college credits and work toward an associate degree.

Thomas Fleming, director of the NECC Methuen Police Academy spoke about what’s involved in the academy, which welcomed its second class this fall. 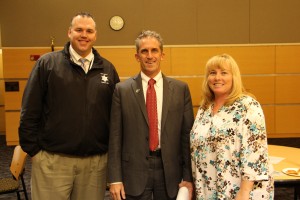 The intensive 25-week program covers constitutional law, prevention and intervention, community policing, domestic violence, elder abuse, victims’ rights, and other topics. All training takes place on the Haverhill Campus except for fire arms training and emergency driving techniques which are held at off-campus locations. Most recruits are sponsored by local police departments so they work in the area after graduation.  The program is authorized by the Municipal Police Training Committee.

Fleming graduated from the NH State Police Academy in 1980, which was located at the NH Technical Institute, and, he has 20-plus years of experience directing police academies.

He said their training is focused on community policing and is scenario based, meaning recruits are exposed to situations they are likely to encounter after they graduate.  “We need to get our training as close as possible to reality,” he said.  “The average recruit is 25-years old with no experience in law enforcement or corrections.  We have to prepare them to deal with what can often be difficult issues.”

Jason Ebacher, assistant superintendent III, Essex County Sheriff’s Department, said their training also has to be “as real as possible.”  Once on the job, corrections officers work unarmed with a partner in a unit housing 120 inmates.  “”Our job is the care and custody of the inmates,” he said.  We teach recruits to treat inmates with respect.”

The Essex County Sheriff’s Department began holding the classes for its academy in September of this year.  The 12-week academy covers topics including first responder medical training, defensive tactics, ethics and professionalism, substance abuse, cultural diversity, and more.  Graduates are prepared for careers as corrections officers in the Essex County Sheriff’s Department.

Some members of the college community have expressed concerns about aspects of the training, asking whether it’s appropriate for a college campus, and Lane Glenn encouraged anyone with questions or concerns to contact him, lglenn@necc.mass.edu, or George Moriarty, the college’s executive director of workforce development, gmoriarity@necc.mass.edu.  “This is still pretty new and we’re learning,” said Glenn.  “If something concerns you, we will consider it and do our best to address it.”