Student-Designed Solar Cars are Printed on the 3D Printer 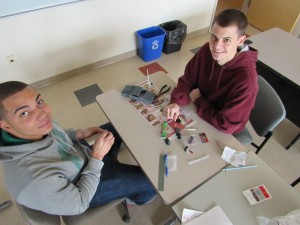 Elizabeth Lee of Peabody has been a professional artist—and octopus lover—for 20 years, so when she was tasked with designing a solar-powered car for her Computer Aided Drafting II course at Northern Essex Community College, she knew she wanted to pay homage to her favorite animal. The result? An eight-tentacled vehicle that looks as funky as her imagination, and actually runs, too. And thanks to NECC’s 3-D printer, Lee and her classmates have been able to bring their designs to fruition.

“I love decorative creepy crawlies,” Lee says, her hands adorned with an octopus ring and bracelet, as she works in the computer lab and shows off her ambitious car design.  “This is where art and engineering come together.” 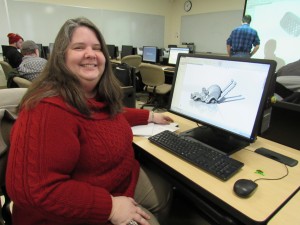 At 45-years old, Lee has spent two decades as an artist and graphic designer and already has a Bachelor’s degree in art. Now she hopes to advance her career by earning a Computer Aided Drafting (CAD) certification from NECC.

“The whole world of engineering is so much less mystifying now and so much more attainable,” she says. “I’m 45. I feel like I’m starting a whole new career path.”

She’ll have an excellent start on that career path thanks to her instructor, Jim Cahaly, an adjunct faculty member in NECC’s engineering and technology department, and the North American engineering director for a large tech company. Cahaly says he runs the class more like a business, teaching the students the kinds of hands-on skills that they’ll actually use on the job, from CAD, reverse engineering, and circuit design, to demonstrating and presenting their work as though it were a sales pitch to potential clients.

“You won’t get training like this at a big university,” Cahaly says, and he should know. He hires new grads and often has to train them on the very things that are par for the course at NECC. Large universities often focus more on theory than practice, and their graduates actually need on-the-job training.

“Their skills aren’t anything like what these guys are getting,” he says. “That’s where this advantage is really dramatic.” 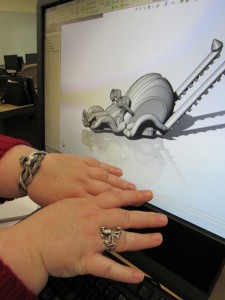 Cahaly hopes his students move onto four-year programs after NECC, and that’s the plan for mechanical engineering major Mike Komornick, 21, of Atkinson, NH. His thoughts seem to echo those of his classmates.

“I’m really open to anything at this point,” he says. “As long as I can solve problems and think creatively.”

To learn more about the technology and engineering associate degrees and certificates offered at Northern Essex, visit the www.necc.mass.edu/technology-engineering.

With campuses in Haverhill and Lawrence, Northern Essex Community College offers over 70 associate degree and certificate programs as well as hundreds of noncredit courses designed for personal enrichment and career growth. More than 7,400 students are enrolled in credit associate degree and certificate programs on the Haverhill and Lawrence campuses; and another 6,700 take noncredit workforce development and community education classes on campus, and at businesses and community sites across the Merrimack Valley. Northern Essex is the only state college located in the lower Merrimack Valley Region of Massachusetts. For more information, visit the website at www.necc.mass.edu