NECC Builds Partnerships with Colleges in the Dominican Republic 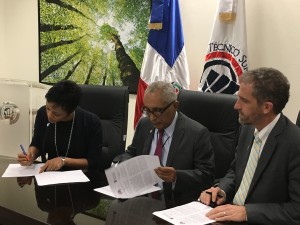 Only 11 percent of Lawrence residents have bachelor’s degrees which is significantly lower than the Massachusetts average of 39 percent.

Lane Glenn, president of Northern Essex Community College, with campuses in Haverhill and Lawrence, MA, would like to help increase those percentages and a recent trip to the Dominican Republic was intended to do just that.

According to Glenn, 60 percent of the students studying at NECC’s Lawrence Campus are Hispanic, largely with roots in the Dominican Republic, and many enroll at the college with credits from schools there.  “We want to make it easier for them to transfer those credits to Northern Essex so they can earn a certificate or degree more quickly and go on to secure better paying jobs,” he said.

Glenn, along with Noemi Custodia-Lora, executive director of NECC’s Lawrence Campus, Lawrence Mayor Dan Rivera, and State Representative Marcos Devers recently returned from a five-day trip to the Dominican Republic, where they met with educational leaders from two and four-year colleges.  They were hosted by the Universidad Autónoma de Santo Domingo (UASD), the public university system of the Dominican Republic, which Northern Essex signed a formal agreement with in August in Lawrence.  Representative Devers graduated from UASD with a civil engineering degree in 1978. 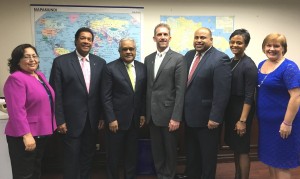 A highlight of the visit was the signing of a new agreement with Instituto Técnico Superior Comunitario, the Dominican Republic’s first public two-year college, which began offering courses in January 2013.

The agreement will allow for the transfer of credits and also provide opportunities for faculty, staff, and student exchanges.  Other ideas that were discussed included online delivery of Northern Essex courses to students in the Dominican Republic and resources for local residents who need help validating their educational credentials from the Dominican Republic.

Colleges in the Dominican Republic are especially interested in Northern Essex’s health care programs, which are taught in Lawrence.  Eighteen hundred students are enrolled in one of the college’s 25 associate degrees or certificates leading to careers in health care.  Last November, Regis, a leading Catholic University, announced that they were opening a new satellite campus on Northern Essex’s Lawrence Campus, offering bachelor degree completion programs in nursing, public health, and health sciences.

“We’re creating an educational ladder in Lawrence that will give Lawrence residents access to good paying careers,” said Glenn.  “The more quickly we can get people educated, the better our local economy will be.”