Sociology was the Answer for This Faculty Member 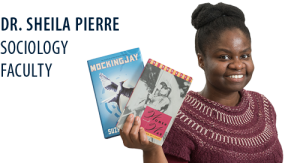 Dr. Sheila Pierre says she found the answers to life’s questions from studying sociology and says her NECC students can expect to do the same.

Young or old, rich or poor, it’s human nature to ask questions about the world around us including everything from youth and pop culture to health advancements to terrorism and social movements, she says.

Sociology, simply put, is the study of society. Or more exact, a social science involving the study of the social lives of people, groups, and societies, she says. Introduction to Sociology is one of the many behavioral sciences offered at Northern Essex.

“Studying sociology can help foster your creativity, innovation, critical thinking, and analytic problem solving and communication skills, says Pierre. All of which are skills she says, the global and technology driven 21st century labor market demands.

As a child of Haitian immigrants, questions came early to Pierre, she says. From the time she was old enough to understand, she struggled to know why certain countries and groups continue to remain the poorest and least developed in the world.

As an undergraduate history and sociology major at Emmanuel College Pierre thought her philosophy classes might shine some light on these dark issues, but she found only abstract answers. To her surprise it was her sociology classes which shone light, high and bright to reveal that structure and culture are the reasons why countries’ political, economic, and environmental climates continue to decline.

But is sociology exciting?

“What is there not to be excited about,” she says. “I get to explore, read, examine, and research topics involving the media, globalization, ethnicity, race, youth culture, pop culture, sexuality, gender, health, poverty and family.”

The field of sociology is overarching, she says.

“I have colleagues and close friends who have gone into health services, business, publishing, teaching, social services, community work, law, and even college communities.”

A former competitive tennis player, Pierre devotes her spare time now to a social movement…she says enroll in her class and she will share which one.