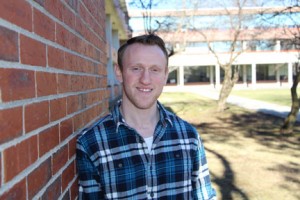 Even though Northern Essex student and cancer survivor CJay DiPrima isn’t a chemistry major, he sure knew how to turn a negative into a positive.

When the Windham, NH, resident was diagnosed with a rare form of NonHodgkins Lymphoma, called “gray zone” in the fall of 2012, the news was devastating for DiPrima and his family. There are approximately 500 diagnosed cases of gray zone in the United States.

DiPrima, who was a student at Franklin Pierce University at the time he was diagnosed, took the spring of 2013 off and underwent intensive chemotherapy and radiation. His personal mantra throughout his ordeal was “stay positive”. He and childhood friend Tom Mullin thought the mantra might look interesting on a t-shirt and went to work designing one. When they realized “stay positive” wouldn’t fit on the front of the t-shirt, they shortened it to “stay +” with the thought they could change the + sign to different colors to represent different cancers. 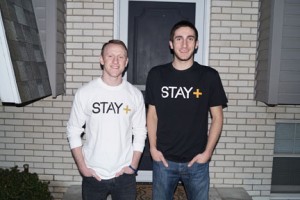 The t-shirts started to get noticed, he says. So he and Mullin wrote a short business plan, filed for an LLC in New Hampshire as Stay Positive Apparel, and started promoting the t-shirts on social media.

That lone t-shirt design has grown to include men’s and women’s tank tops, winter hats, baseball caps, sweatshirts, wristbands, and visors. The apparel are screened locally at a Pelham, NH, company – Body Rags. DiPrima and Mullin have a shipping station set up in the DiPrima home and ship their products all over the world.

“We donate 30 percent of all proceeds to the Massachusetts General Hospital Cancer Center for Children, which is where I was treated,” he says. “This was a way for me to give back for all they did for me”

To date, Stay Positive Apparel has donated close to $9,000 to MGHfC.

Now in remission, the entrepreneur turned philanthropist is slated to graduate from NECC in May with an associate degree in art with a focus on multi-media. He currently carries a 3.75 GPA.

The 22-year-old says his NECC classes have played a role in the company’s success.

“I love Northern Essex. I’m always designing and I’ve been able to incorporate my business designs into school projects and vice versa.”

DiPrima’s story has caught the attention of New Hampshire Chronicle, which will be airing a feature on Stay Positive Apparel on Thursday, February 4.

When DiPrima isn’t in school or working on Staying Positive Apparel, he stays busy bussing tables at Mary Ann’s diner in Windham, NH. He will transfer to Southern New Hampshire University in the fall taking 90 NECC credits with him. He plans on studying graphic design and media arts.

He and Mullin, who is studying business, would like to make Stay Positive a full-time gig. For now they are attempting to make the company a nonprofit and have a launched gofundme site to pay for the legal expense of filing for nonprofit status.