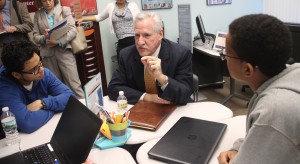 Dr. Santiago, who is the state’s first Latino commissioner of higher education, said he will focus on getting more people enrolled in college, increasing college completion rates, and closing achievement gaps.

This is important, he says, because only 50 percent of Massachusetts residents have a bachelor’s degree, and 80 percent of jobs require a bachelor’s.   He also reported that one third of our workforce is 55 years old or older, predicting a “slew” of retirements in the next 10 years.

“We need to create pipelines to help more Massachusetts residents graduate from college,” said Santiago.  “Employers tell us if we don’t produce a workforce with the skills they need they will go elsewhere.”

While in Lawrence, the commissioner met with staff and students in the NECC Student Success Center, which provides services including counseling, mentoring, and career exploration to approximately 600 students each year, the majority of whom are first generation Latino students.

He asked students what has been most helpful to them and what could be improved.

Maireny Rodriguez-Aquino, an engineering science major from Lawrence, described the challenges of trying to complete an associate degree in two years and the cost of textbooks.  “I will take fewer credits, so I have the money to buy books.”

Another challenge, especially for first generation students, is navigating the path to college.  “You need to encourage people to go to college.  Dealing with the MCAS, SATs, and college applications can be crazy,” said Rodriguez-Aquino.

The commissioner spent the morning on the Lawrence Campus.  In addition to visiting the Student Success Center, he attended an open house for the Guided Pathways to Success in STEM program, a grant funded program that helps align college programs with workforce needs; visited with the college’s education partners, including President Hays of Regis College, Jeff Riley, superintendent, Lawrence Public Schools; and John Lavoie, superintendent/director,  Greater Lawrence Technical School; and members of the Lawrence Partnership, a consortium of community and business leaders.

He spent the afternoon in Haverhill, meeting with President Lane Glenn’s cabinet and the college’s board of trustees.

Dr. Santiago is an economist who is a former CEO of the Hispanic College Fund and the former chancellor of the University of Wisconsin-Milwaukee.   He was appointed as commissioner by Governor Baker in July of 2015.  His visit to Northern Essex was part of his plan to visit all of the 29 colleges in the Commonwealth.