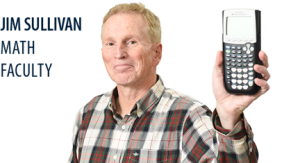 This positive attitude is what he carries into his math classes, whether he is teaching basic algebra, math fusion, math literacy, statistics, or trigonometry.

Sullivan says he provides a classroom environment where everyone feels comfortable doing math. He also employs lots of group work where students complete assignments in teams of four. They work on activities that show how math is used in today’s world.

For example, math is the science behind global warming, he says.

“Taking the calculations of planetary temperatures along with the measurements of rapidly rising carbon dioxide in the atmosphere, indicate that the burning of fossil fuels does in fact release gases into the atmosphere that cause global warming.”

While Sullivan offers a supportive environment, he also cautions, “math is not a spectator sport.” If a student is willing to embrace the work and visit the math lab if necessary, then they can own the math class.

For 33 years, 11 at Northern Essex, Sullivan has been teaching math-phobes and mathletes alike on the virtues of math. He impresses on them the value of conquering math.

“Math opens doors to success in college, in careers, and in life,” he says. “Most major fields of study require students take one or more college level mathematics courses.  For example, an associate degree in Liberal Arts at NECC requires the completion of two college level mathematics courses. Entry into any STEM (Science, Technology, Engineering, and Math) career requires a very strong mathematical background.  Also the math involved in financial literacy is key to navigating student loans, car loans, and credit card debt.”

Over the years, he notes, the top ranking jobs for pay and satisfaction have consistently been those that require a strong background in math.

An NECC classroom, Sullivan says, is a great place to tackle math.

“It’s the best value in higher education, allowing any student the opportunity to take small classes with committed professors on their pathway to a career and/or transfer to a four-year college.”