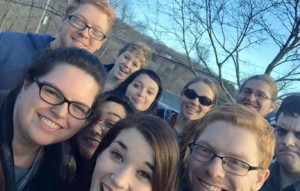 Hannah Heckman-McKenna of Salem, NH; Geehae Moon of Haverhill; Caitlin Kennedy of Methuen; Sarah Bird of Tewksbury and Abby Seabrook of Newburyport and their partners, Ben and Nate Joyall and Natalie Scott of Groveland; Armando Belliard of North Andover; and Hunter Gouldthorpe of Salisbury competed in the Irene Ryan Acting Scholarship auditions. To qualify to perform, students are nominated from college productions which have been entered in KCACTF. A representative of the festival, usually a professor from another participating college or university, serves as a respondent to the production and chooses the nominees.

Seabrook, competing against students from across New England and eastern New York State, was selected to be one of the 36 semi-finalists from a pool of nearly 300. Adrian Peguero of Methuen, a former Top Notch Player, who now attends Salem State University, was also a semi-finalist.

Moon and Robert Mantegani of New Market, NH, also presented scenes as part of the Student Directing Initiative (SDC), with NECC students as their actors. Mantegani was recognized for his work as a stage manager and Matthew Lundergan of Raymond, NH, now at Salem State University and a recent Top Notch Player, won the regional SDC and will travel to the national KCACTF in April.

While at the festival, students audition to be cast in stage readings of new plays being presented at the festival. Belliard was cast in one of the 10-minute plays and Moon was cast in a one-act play. Moon was singled out for a merit achievement for her work on this play.

Kristopher Schooner of Manchester, NH, who is now at the University of New Hampshire, was nominated while a student at NECC to participate in the Richard Maltby Jr. musical theater initiative at the festival.

NECC offers an associate degree in Liberal Arts: Theatre Option which offers the opportunity to sample various aspects of theater. Individuals can take courses in acting, directing, improvisation, children’s theater and may earn credits for working on college productions in stage management and technical theater. Graduates can pursue many career paths or transfer to a bachelor’s program in acting, directing, or technical theater for employment as an actor, theater manager, house manager, stage manager, set, lighting, costume or sound designer, technical director, or scenic artist director.

For additional information, contact Jim Murphy, coordinator of theater at NECC at jmurphy@necc.mass.edu or call 978-556-3377.