Assistant Coach Steps up to the Plate 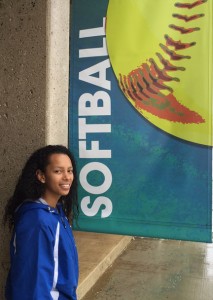 For two years, Kendra Hobbs was the understudy for the role of head softball coach at Northern Essex Community College. Last week Hobbs stepped into the spotlight as coach. It is a role she has been preparing for since she was a young girl.

The 24-year-old Haverhill resident served as NECC’s assistant softball coach for the last two seasons when the softball team was revitalized under Coach Robert Gillespie. He recently resigned to become softball coach at Newburyport High School.

“We don’t plan on missing a beat,” said the 2009 Whittier Regional Vocational Technical High School graduate where she was a star softball player. In 2013, she graduated from the Massachusetts College of Liberal Arts where she studied biology and was a valued member of both the softball and volleyball teams.

“We are very fortunate to have had Kendra on our staff. She was able to move right into the head coaching job. Kendra will do a great job as she is very knowledgeable about the sport of softball. She knows the student-athletes and is very familiar with NECC,” said Northern Essex Athletic Director Sue MacAvoy.

As head coach, Hobbs has the opportunity to meld her personal playing experience, which she has honed since she was 12, with her coaching experience. Before she was tapped to be the assistant NECC softball coach, Hobbs coached 12 to 18 year-olds on travel teams for five years. She still coaches a U-16 team.

In addition to her coaching duties, Hobbs works as a long-term, substitute teacher in the Haverhill school system. She is also working on completing her teaching licensure and is planning to enroll in a master’s degree program in secondary education.

Other than play softball, Hobbs says there are two paths she has always wanted to follow – teaching and coaching; the first allows time for the second and the second complements the first, she says.

Her coaching style, she says, is to set an example.

“I have a lot of patience. I like to teach,” she says. “I like to take the friendly approach and show by example. I get things done when I need to.”

Hobbs has the more than a dozen players who have joined the team working on conditioning. Some players are returning for their second year, so Hobbs is already familiar with their playing ability.

“We have a good group. They are academically stable. These students have plans for their future,” she says. “They are invested in themselves.”

Hobbs says she would really like to see the team make it to the state championship, but acknowledges that with only one pitcher it could be a challenge.

Hobbs says her players can expect a season of fitness and strength training.

“Some coaches start the season with fitness and strength and then back off,” she says. “I think it’s crucial to stay strong for the whole season because it’s a long season and the players need endurance.”

In addition to going for the win, Hobbs says, she hopes her players have fun and learn something.

“As a team, we are really stepping in the right direction,” she says. “We could skyrocket over the next few years.”