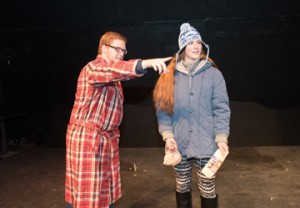 Nate Joyall of Groveland and Annabel Dryden of Haverhill appear in Northern Essex Community College’s production of the romantic comedy “Almost, Maine” this weekend April 1 and 2 and next weekend April 8 and 9 at 7:30 p.m. on the Haverhill campus.

It’s the middle of winter in a little, remote, Maine town and its residents inexplicably begin falling in and out of love. This is the premise of the romantic, comedy “Almost, Maine” by John Cariani which is the Northern Essex Community College spring theater production. It opens April 1 in the Chester W. Hawrylciw Theater on the third floor of the Spurk Building on the Haverhill campus, 100 Elliot St.

“As the Northern Lights hover in the star-filled sky above, Almost’s residents find themselves falling in and out of love in unexpected and often hilarious ways,” says Jim Murphy, NECC Theatre Professor and director of “Almost, Maine”.

“Knees are bruised. Hearts are broken. But the bruises heal, and the hearts mend ~ almost ~ in this delightful midwinter night’s dream.” 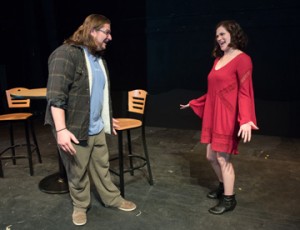 Abigail Seabrook of Newburyport and Hunter Gouldthorpe of Salisbury appear in Northern Essex Community College’s production of the romantic comedy “Almost, Maine” this weekend April 1 and 2 and next weekend April 8 and 9 at 7:30 p.m. on the Haverhill campus.

Tickets are $10 for general admission and $8 for students and seniors.

NECC offers an associate degree in liberal arts: theatre option which offers the opportunity to sample various aspects of theater. Individuals can take courses in acting, directing, improvisation, children’s theater and may earn credits for working on college productions in stage management and technical theater. Graduates can pursue many career paths or transfer to a bachelor’s program in acting, directing, or technical theater for employment as an actor, theater manager, house manager, stage manager, set, lighting, costume or sound designer, technical director, or scenic artist director. 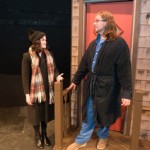 Abigail Seabrook of Newburyport and Hunter Gouldthorpe of Salisbury 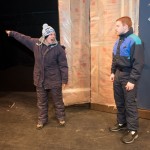 Hannah Heckman-McKenna of Salem, NH, and Ben Joyall of Groveland 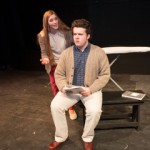 Annabel Dryden of Haverhill and Christian Doyle of Newburyport