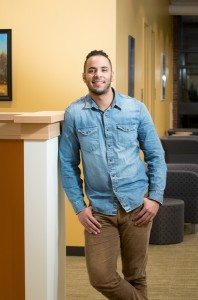 Northern Essex Community College Student Carlos Rivera of Methuen will be honored by Governor Charles Baker at the Massachusetts State House in Boston on Monday, May 9 as an outstanding graduate of the class of 2016.

A 2011 graduate of Lawrence High School, Rivera will graduate from Northern Essex in May with honors and an Associate Degree in Liberal Arts: Biology and Psychology.

Rivera came to Northern Essex the fall after he graduated from high school but he admits that he didn’t get serious about his college education until a year and a half ago when he decided he needed to focus on his academics if he was going to achieve his goals in life.

Since then, he has soared academically—he has a 3.8 GPA in his STEM courses—and become one of the most sought-after tutors on campus.

Rivera started tutoring after a Calculus 1 professor noticed he had an aptitude for math and asked if he would be interested in working as a tutor in the math lab.  That led to a job as a supplemental instructor in algebra and trigonometry, where he taught weekly help sessions for students, and a position as a student assistant in the College Success Center, which provides support and resources for students on the Lawrence Campus. Rivera has also tutored students at the Guilmette School and Notre Dame High School, both in Lawrence.

Rivera has also been active in college athletics.  He played varsity basketball for a year before deciding to focus on his academics and currently keeps score for the varsity basketball games.  He also volunteers in the community through the athletics department at Cor Unum in Lawrence and Open Hearts Ministry in Haverhill.

Always intrigued by the mind and how it works, Rivera decided to major in psychology when he enrolled at college.  When he discovered he had a passion for biology, he decided to investigate how he could combine his two interests, a journey that led him to neurobiology.

An internship with an ear, nose, and throat surgeon at Lowell General Hospital introduced him to surgery and he says “I found I loved being there.”  As part of his internship, he would stand in the operating room for up to four hours at a time, looking over the shoulder of the surgeon and observing surgery ranging from tonsillectomies to jaw replacements.

Rivera wants to be a neurosurgeon and he is planning to transfer to UMass Lowell in the fall, where he will major in biology and psychology.  After that he will apply to medical school.

“Overall, I can’t say enough good things about Carlos.  His drive to succeed, his passion, and his warmhearted nature will take him far in this world,” wrote Saliba.

In May 2011, the Massachusetts Department of Higher Education launched “29 Who Shine,” a program to recognize outstanding students representing each of the 29 public campuses. The honorees, chosen because of their academic achievements and record of student leadership and community service, stand poised to contribute greatly to the civic life and economic well-being of the state. Whether furthering their education or entering careers here in Massachusetts in fields as diverse as education, public policy, medicine, creative arts, and engineering, they truly embody the vibrant future that we all envision for the Commonwealth.

With campuses in Haverhill and Lawrence, Northern Essex Community College offers over 70 associate degree and certificate programs as well as hundreds of noncredit courses designed for personal enrichment and career growth.  More than 6,600 students are enrolled in credit associate degree and certificate programs on the Haverhill and Lawrence campuses; and another 3,400 take noncredit workforce development and community education classes on campus, and at businesses and community sites across the Merrimack Valley.  Northern Essex is the only state college located in the lower Merrimack Valley Region of Massachusetts. For more information, visit the website at www.necc.mass.edu.