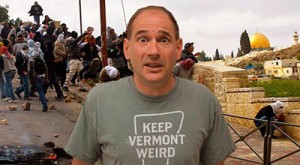 Northern Essex Community College will host a performance of David Kaye’s “How I Brought Peace to the Middle East: A Tragicomedy” in the Chester W. Hawrylciw Theatre located on the 3rd floor in the Spurk Building on the Haverhill campus at 7:30 p.m. on Thursday, April 21.

Kaye tells the story of moving his small family to Israel for six months in 2012 to teach on a Fulbright Scholarship. A self-proclaimed “naive Jew from Vermont,” Kaye had high hopes of settling the turmoil overseas once and for all. This funny and touching one-man show will take the audience along on Kaye’s many misadventures from New England to the Holy Land.

Kaye won a Spotlight on the Arts Award for best new play for the show, and performed the piece as an official selection at the prestigious United Solo Festival in New York City.

Kaye, who resides in southern Maine, currently serves as chair of the Department of Theatre and Dance at the University of New Hampshire. He has worked throughout the U.S. as a professional actor, director, and designer for such companies as the Texas Shakespeare Festival, the Theater at Monmouth in Maine, the National Theatre of the Performing Arts in NYC, Boston Chamber Theatre, and Stages Repertory Theatre in Houston, TX.

“How I Brought Peace to the Middle East: A Tragicomedy” is presented by the NECC theatre department.

Admission is free for NECC students with student id.

Tickets are $10 for general admission and $8 for seniors and students. Tickets may be purchased at the door or www.mvarts.info.