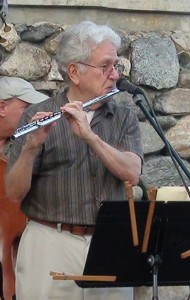 The Essex Chamber Music Players (ECMP), in residence at Northern Essex Community College, will present the world premieres of four, new works in a concert on Sunday, April 17, at 2 p.m. in the Hartleb Technology Center on the Haverhill campus, 100 Elliott St.

The concert will feature “Three Rustic Songs on Poems of Robert Frost”: “The Quest of the Purpled-Fringed,” “The Sound of Trees” and “Acceptance,” set to music composed by Stephen James.

The program also will include the full version of composer Elliott Miles McKinley’s “Of Memories…Of Love 1978.” The piece was created in memory of Joni Alicia Finegold, who died of cancer in 2012, the daughter of flutist and ECMP artistic director Michael Finegold of Andover.

Also premiering is Peter R. Farmer’s jazzy “Thoughts Returning” and Nathanial Akers’ “Flight of Change”, which is music in an “indies” style that includes a tribute to the late composer William Thomas McKinley.

The concert is part of ECMP’s Local Cultural History through Music project, which champions the poets of the Merrimack Valley.

For additional information on the concert or the Essex Chamber Music Players, go to www.ecmp.org