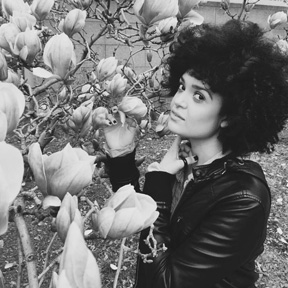 Diannely Antigua was just nine years old when she began confiding in her journal.

It’s a literary practice that has served the Northern Essex Community College alumna well. Today, Antigua is completing her first year of a two-year Master of Fine Arts in Creative Writing program at the prestigious New York University (NYU). An accomplished poet, the 26-year-old former Haverhill resident, is returning to NECC Friday, May 6, as the guest speaker at NECC’s 8th Annual Peace Poetry Project and Reading.

She came to Northern Essex in 2006 as a shy 16-year-old who had received her middle and high school education from a small, local church-based school where much of the work was self-paced. She graduated from this self-motivated program and enrolled at Northern Essex.

“Northern Essex was everything I needed when I needed it,” she says. “It was 10 minutes down the road, it was affordable, and I was never just a number.”

Her years at Northern Essex, she says, allowed her time to develop as a writer and mature as a young woman.

“If not for Northern Essex,” she says, “I wouldn’t have had a fighting chance. I would have been lost. It was the stepping stone I needed to prepare me for university life.”

With the support of professors like Robert Jackson, Carolyn Cohen, Linda Desjardins, Carol Baron, Barbara Stachniewicz, Ginger Hurajt, and Paul Saint-Amand she earned an Associate of Arts degree in Liberal Arts: Writing in 2009 and gained a “second family”.

“They were really influential in my life,” she says.

When they introduced her to poetry, it was transformative.

“I knew immediately,” she says, “poetry was what I was searching for the whole time.”

She transferred to UMass Lowell and earned a Bachelor of Arts in English with a concentration in poetry.

For a time, Antigua worked as an academic advisor to UMass Lowell student-athletes and later taught as a substitute teacher in the Lawrence schools. While that held her interest and paid her bills, she continued to write poetry.

When she began researching graduate programs she was delighted to learn you could study poetry at a master’s level.

She says studying at NYU has made her a better poet and a better writer. It is not unusual for her to read a book of poetry a week and write two or three full-length poems.

“Being in New York has nurtured my art in a way other cities couldn’t,” she says.

She currently calls Brooklyn home where she lives with three other poets in an apartment she aptly named “the poet apartment”.

“They are all great company and brilliant writers,” she says.

Antigua also works part time as an academic adviser at NYU and in the office of The Academy of American Poets.

Eventually she hopes to be a published poet teaching or working in higher education. For now, she is content to hone her craft and encourage the next generation of poets – thus her involvement with Saint-Amand’s Peace Poetry Project.

“I think it’s really great,” she says. “I’m encouraged by it. You have children in grades kindergarten through high school writing poetry about peace. For young people to be writing poems about what they see going on in the world around them can allow for an inner peace.”

The contest, organized by NECC English Professor Paul Saint – Amand, is sponsored by the NECC English department, Division of Foundational Studies and Liberal Arts & Sciences, and the Office of the Vice President of Academic and Student Affairs.

Saint-Amand, a Vietnam-era veteran who is committed to peace, introduced this peace poetry concept more than 30 years ago when he was teaching in upstate New York. When Saint-Amand relocated to Gloucester and began teaching at NECC, he brought the contest with him.