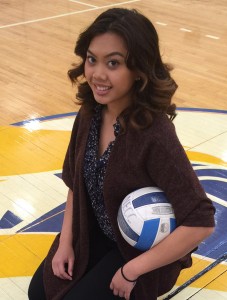 The 23-year-old Reum was born, raised, and educated between the North Shore and the Merrimack Valley. A 2015 business graduate of Merrimack College, she is completing her master’s in education through Merrimack’s Fellowship program. She has been working as a Fellow at Northern Essex in the Academic Innovations and Alternative Studies department.

Caruso also brings playing and coaching experience to his new position. A 2012 graduate of Haverhill High School, he played varsity volleyball all four years. Also a middle-hitter, Caruso is just wrapping up his junior year at Lasell College where he started all three years and saw the men’s volleyball team take its first conference title.

Having played at different levels and for different coaches, the 22-year-old says he has gathered a few coaching tips he employs as the coach of a high school club team.

Ideally, Reum and Caruso are looking for a roster of 10 or 12 players when the fall sport kicks off its season in late August. She is encouraging interested players to play in spring and summer leagues to keep up their skill set.

Her coaching style, Reum says, is one of collaboration.

“I look for team work and chemistry on the court,” she says. “I look for perseverance. Players shouldn’t let a bad play stop them. I try to instill in my players to be better than who they were yesterday and to learn from their mistakes.”

NECC Athletic director, Sue MacAvoy, who was once the NECC women’s volleyball coach, says she is thrilled to have Reum and Caruso on board.

“They come to Northern Essex from different walks of volleyball life,” she says. “They should have NECC back on the volleyball map very quickly.”