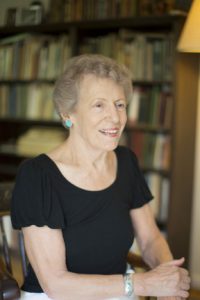 To the rest of the world he was a renowned poet, author of “The Road Not Taken,” a former U.S. Poet Laureate, and the poet who recited “The Gift Outright” at the inauguration of President John F. Kennedy.

To Lesley Lee Francis he was grandfather. A topic she explores and shares in a recently published book “You Come Too: My Journey with Robert Frost, ” which is also the title of the White Fund lecture she will present in partnership with Northern Essex Community College on Monday, June 27, at 7 p.m. at the Lawrence Heritage State Park,  1 Jackson Street, Lawrence.

Frost had a strong connection to Lawrence having moved there when he was 11 years old. He attended Lawrence schools before continuing his education at Dartmouth College and later Harvard University. He returned to Lawrence as editor of “The Lawrence Sentinel”.

A graduate of Radcliffe College, she holds a Ph.D. in Romance Languages from Duke University.  She was a professor of Spanish language, literature, and history at a number of colleges and universities and ran a summer program in Spain.

Now retired from the professional staff of the American Association of University Professors (AAUP) in Washington, D. C., she continues teaching and writing and helps organize the annual Frost Symposium.  Dr. Francis has lectured and published extensively on her grandfather.  Her biographical study, “Robert Frost: An  Adventure in Poetry, 1900-1918,” is available in paperback (Transaction Publishers).

She currently lives in Arlington, VA. Her three daughters and six grandchildren live nearby.

For additional information or to be notified of upcoming events in the White Fund Enlightenment Series, contact Analuz Garcia at agarcia@necc.mas.edu or call 978-738-7423 or visit the website www.necc.mass.edu/whitefund