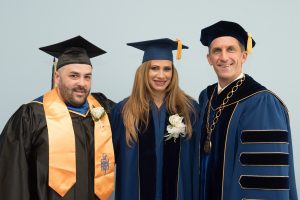 Armed with a message of positivity and resiliency as well as a t-shirt cannon, Northern Essex Community College President Lane Glenn opened the 54th commencement exercises on Saturday, May 21, on the quadrangle on the Haverhill campus.

President Glenn opened the ceremony asking the graduates to hold their cell phones high. He took a photo of the cell phone toting graduates and shared it on social media and asked them to do the same.

He reminded the crowd seated under an enormous white tent that “commencement is an opportunity to celebrate your accomplishments and also to celebrate your resilience because as we all know achievement is not always a straight path…our ability to bounce back often determines whether we will be successful.” 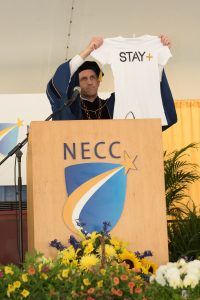 NECC President Lane Glenn exhibited a “Stay+” t-shirt which is the creation of graduate CJay DiPrima.

Two members of the graduating class were highlighted as “shining examples of how important attitude is to success, and how the choices we make and the personal strength we demonstrate during difficult times are what’s important.

Jeanne Hallisey of Amesbury, who graduated with high honors and an Associate in Science Accounting degree, was praised by Glenn for completing her degree while raising two children and caring for her husband, who succumbed to cancer in February.

The college community is “…impressed by your talent and perseverance, and inspired by your resilience,” Glenn said.

Twenty-two year-old CJay DiPrima was lauded for completing his Associate in Arts General Studies: Art after being diagnosed with a rare form of cancer, which resulted in the founding of the “Stay +” apparel line of which 30 percent of all proceeds are donated to the Massachusetts General Hospital Cancer Center with a year to date total of $9,000.

Glenn displayed a t-shirt to the crowd and then proceeded to launch tightly, rolled, “Stay +” t-shirts into the crowd first with a t-shirt launcher and then by hand. 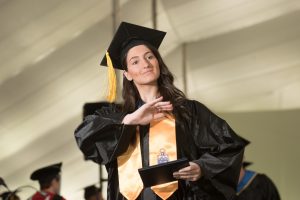 Jeanne encountered, but I’m sure you faced your own adversity…take a minute to remember those strengths within you that helped you persevere…”

The featured speaker was Lawrence Attorney Wendy Estrella, a 1994 graduate of NECC who continued her education at Merrimack College where she earned a bachelor’s degree in accounting and later the Massachusetts School of Law where she earned her juris doctorate.

Estrella recounted for the crowd her tale of success from the Dominican Republic to her success as an attorney in the United States.

“My story is like so many others in the United States of America. I am an immigrant who migrated to this country at the age of 13 not knowing a word of English…I realize my upbringing gave me great resilience…It was my attitude and determination that helped me reach my goals. Today I’m living the American dream thanks to this wonderful country of opportunities.” 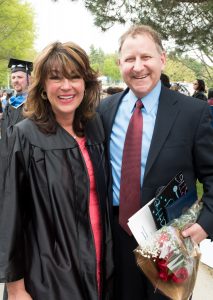 Respiratory Care graduate Laura Forman and husband Mark Forman, a member of the NECC Board of Trustees.

Northern Essex, she said, “…was a game changer” for her and her journey to success.

Here is a link to Estrella’s speech.

Ray Florent of Merrimac was the student commencement speaker. A former welder, he enrolled at Northern Essex after a serious workplace injury. He graduated with high honors with an Associate in Science Elementary Education. He is transferring to Merrimack College to earn his bachelor’s degree and teaching license.

Florent told his fellow graduates that as a nontraditional student he had a little more experience than other college students. He imparted his wisdom on them.

“Whenever you do something, do it well…Immerse yourself…Don’t be afraid to make a difference in this world… be your extraordinary self…when you experience loss…there are gains to be made.” 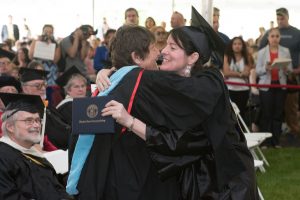 Hamilton of Plaistow, N.H., who is currently attending Berklee School of Music.

Alumna Susan Bonefant, who is chairperson of the NECC Alumni Association, presented the Outstanding Alumni Award to Wendy Estrella, the commencement speaker.

Here is a link to the photos of the ceremony.