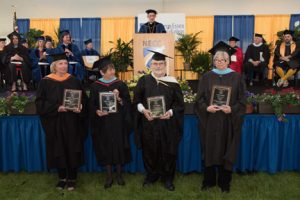 Five Northern Essex Community College faculty members Catherine “Kitty” Dabrowski of Salem, MA, Linda Desjardins of Hampton Beach, NH, Alan Hislop of Plaistow, NH, Nancy Nickerson of Methuen, and Susan Sanders of Hampstead, NH, were recently honored with the title of emeritus during the NECC 54th Annual Commencement Ceremony on Saturday, May 21, on the quadrangle on the Haverhill campus.

At Northern Essex, the rank of emeritus is an honor that recognizes sustained excellence in performance, character, and meritorious service to the college. Emeritus status is given to a retired college employee based on recommendations by the college’s emeritus committee and approved by NECC President Lane Glenn.

“It’s well known that nursing is one of the most academically challenging programs at Northern Essex,” said NECC President Lane Glenn. “To secure a job in the field, graduates have to be prepared to pass the Massachusetts Licensure Exam and also have the clinical skills to hit the ground running once they are employed. Kitty taught classroom and clinical courses and she excelled in both settings.”

She also provided leadership for the program serving as the coordinator of the day and evening program, he said. She was much loved by all and in nominating her for emeritus status her colleagues wrote, “She was an open ear and a gentle hand to all faculty and students alike.”

An alumna of NECC, Desjardins returned to the college after completing her education in 1975 and joined the English Department as a faculty member. In addition to teaching English at the college and developmental levels, she also taught public speaking and communications. Desjardins was known for experimenting with technology, showing an openness to try new things, such as teaching public speaking fully online, said Glenn.

“Because of her willingness to innovate, she was awarded four technological collaboration grants, two from Johns Hopkins and two from the National Science Foundation,” he said. “Linda was a champion of learning communities, courses that are team taught by faculty from different disciplines…Linda was passionate about offering this opportunity to our students.”

In addition to her success as an educator, she is an avid runner who frequently could be seen running through campus, the neighborhood, or with the President’s Running Club. On April 18 she ran her 9th Boston Marathon.

In 1978, Hislop arrived at Northern Essex as a part-time English as a Second Language instructor. Two years later, he was named ESL Program coordinator. When the program was cut from the budget in 1982, Hislop rescued it by moving it into the Division of Continuing Education. As a result, the program grew significantly, enrolling 600 students in 1985.

One of Hislop’s most rewarding experiences was walking into a local bank and observing a bank employee, who was a former student, communicating with a Spanish-speaking customer with skills learned in his course.

Hislop was a leader in the classroom and on the campus, said Glenn. He served for many years as chair of the academic affairs committee.

Though he retired last year, he continues to teach ESL as an adjunct faculty member, said Glenn, “Which is good news for the college and our students.”

Hislop was named Professor Emeritus of English as a Second Language.

Last year, after 36 years as a professor of English and Theater and coordinator of the liberal arts: theater option, Susan Sanders retired.

“While her contributions in the classroom were many,” said Glenn, “She is best known for her dedication to building a theater program which has been called the best at a New England two-year college.”

He noted that during her years at Northern Essex, she put on 110 plays ranging from Shakespeare classics to contemporary musicals. For the last 15 years she and her husband Jim Murphy, who is also a professor at NECC, produced “A Christmas Carol” which became a local tradition attracting sell-out audiences show after show.

“Susan’s passion was the stage, but she supported all performing arts,” he said.

For decades, Nickerson taught math of all levels to many types of students.

“She was best known for her ability to teach math to anyone,” Glenn said. “She focused on individualized instruction. As Bill Heineman, our vice president of academic and student affairs wrote in his nomination of her, ‘I have never known a teacher with such a passionate and loyal following of students’”.