NECC Knights are Second in the Nation 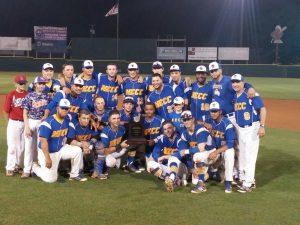 The Northern Essex Community College Knights (Haverhill and Lawrence, MA) are returning from the NJCAA Division 3 World Series in Kinston, NC as the number 2 team in the nation.

The Knights entered the series as an underdog ranked 12th in the country, and as the World Series announcers kept saying “they defied the odds”, coming very close to the championship, which was decided Wednesday night in a 3-4 loss to Tyler (TX) Junior College.

“We could not be prouder of our Knights,” said Northern Essex President Lane Glenn.   “They were competing with the best two-year colleges in the country and their talent, grit, and perseverance were inspiring.  This was very exciting baseball.”

This was the fifth year in a row that the Knights have made it to the World Series, and second place is the closest they have ever come to winning.  Jeff Mejia of North Reading is the team’s head coach, a position he has held since 2013.

The first game lasted over 4 and half hours and went into 12 innings, ending after midnight.  The second game began at 10:15 pm due to a rain delay and didn’t end until after 2 a.m.

The Knights faced Tyler (Texas) Junior College in the semi-finals on Monday, May 30 and had their only loss in the series, 0-10.

A 4-3 win in the semi-finals on Tuesday, May 31 against Rowan College at Gloucester County (NJ) made them eligible for the championship game against Tyler Junior College, which they lost to in a close and hard fought 3-4 battle.

“I have never seen a team play with such heart and soul,” said Sue MacAvoy, the college’s longtime athletic director.  “This is such a great group of young men, and they pulled off quite a feat.”

The Knights had a 22-14 season record and they swept Massasoit Community College in the Region 21 best-of-3 tournament, earning a spot in the World Series line-up.

To learn more about the NECC Knights, contact Sue MacAvoy, smacavoy@necc.mass.edu or 978 556-3820 or visit the website, necc.mass.edu.