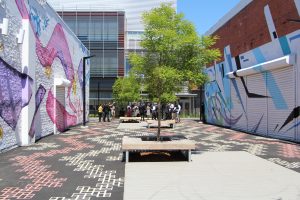 Northern Essex Community College students taking courses in downtown Lawrence now have access to a beautiful outdoor space that can be used for studying or recreation.

On Friday, June 17, the city unveiled the new city center project which runs behind the NECC El-Hefni Allied Health & Technology Center between Essex and Common streets and Amesbury and Franklin streets.

Made possible thanks to a $900,000 Mass Works grant that was announced at the end of 2013, the new space features tree-shaded benches, contemporary lighting, colorful graphic wall murals painted on the sides of buildings, and freshly paved alleys designed with a checkered pattern.  The project was supported by a $7,000 gift from the Lawrence Partnership, a private/public sector collaboration for the economic development and general improvement of the City of Lawrence that was launched in 2014.

“When people walk through our downtown area, they will no longer see trash filled alleyways—they will see areas where they can sit and have lunch with co-workers and friends or read a book in the sun,” said Lawrence Mayor Dan Rivera.  “This is an improvement on the quality of life in Lawrence.”

NECC President Lane Glenn said he calls the new city center “the connector” since it connects NECC students with downtown stores and restaurants.   “The number of students studying in Lawrence has doubled in recent years from 1500 to 3000, and we expect that number to continue to grow,” he said.   “We anticipate that this new center will be a great addition, adding life to the city’s downtown and helping to sustain and grow small businesses.”

Mayor Rivera thanked Lawrence’s state legislative delegation for their help in securing the grant for the project, and Representatives Marcos Devers and Frank Moran and Senator Barbara L’Italien spoke at the unveiling along with Juan Vega, assistant secretary of the Executive Office of Housing and Economic Development.  Representative Diana DiZoglio was unable to attend.

The City of Lawrence and its Office of Planning and Development partnered with NECC, Tec Inc. Engineering and Klopfer-Martin Design Group on this project.  Elevated Thought, an art-based nonprofit based in Lawrence, painted the murals. 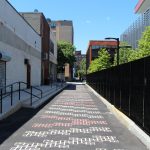 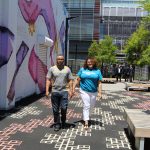 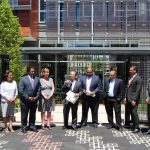 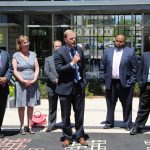 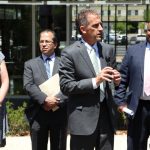 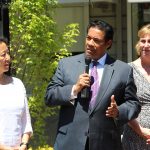 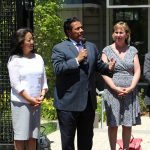 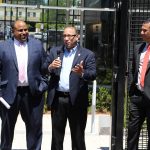 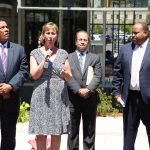 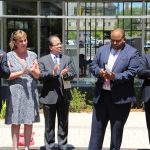