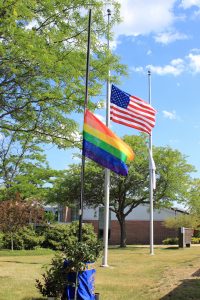 The Pride Flag was flown beside the American Flag on Thursday, June 23, as NECC paused for a moment of silence for the Orlando shooting victims.

Under a sunny sky reminiscent of a Florida spring day, faculty, staff, and students on Northern Essex Community College’s Haverhill and Lawrence campuses and Quarrybrook Learning Center, paused for a moment of silence on Thursday, June 23, at 3:45 p.m. in support of the Orlando, Florida, shooting victims.

“In the earliest hours of Sunday, June 12, 49 precious lives were ruthlessly stolen from us by a gunman who targeted a gay night club, Pulse, in Orlando, Florida.  As the sun began to rise last Sunday morning, we began to learn details of this horrific event,” read Brianne McDonough, NECC’s program manager of Guided Pathways to Success in STEM. “As more information emerged, we came to understand this tragic incident as a blatant attack on members of the LGBT and Puerto Rican communities celebrating their true selves, with their friends and allies, in recognition of Pride month.”

“At this very moment, on our Haverhill and Lawrence campuses, our colleagues are gathered by the flag poles,” said Christine DeRosa, program manager, for NECC’s Center for Corporate & Community Education.

Vengerflutta Smith, an NECC admissions counselor, stood by the Haverhill Campus flag pole and read, “In solidarity with the Orlando shooting victims, and in support of the LGBT community we raise this Pride Flag. Let this flag be a symbol of our love, support, and inclusion for all individuals in our community.”

Noemi Custodia-Lora , executive director of NECC Lawrence campus and community relations, spoke at the Lawrence Campus,” May we continue to embrace all that makes us different, learn from one another, and strive to make the world a better place for everyone.”

Their remarks were followed by a moment of silence for the individuals who lost their lives and their families who mourn them.

In closing, the speakers left the participants with the words of Nelson Mandela, “Education is the most powerful weapon for which you can use to change the world.”