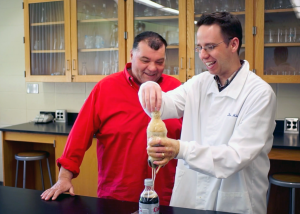 Two Northern Essex Community College faculty members, Dave Rattigan, public speaking, and Mike Cross, chemistry, are part of a television pilot that will be filmed in front of a live audience on Thursday, July 14 at CinemaSalem, One East India Square, Salem, at 8:30 p.m.

Hosted by Boston comedian-actor Tony V, “Tony V’s Project X” is a comedy-educational offering that will offer real instruction mixed with a healthy dose of humor and advice on multiple subjects from the show’s host. The live show will feature standup comedy, video segments from the show, and audience interaction, including Q&A with Tony V.

Rattigan, who is a stand-up comic in addition to being a teacher, is the creator and producer of the show along with Tony V and Paul Van Ness of CinemaSalem.

Cross will be leading a segment on chemical pranks that will be educational as well as funny.

Tickets for the CinemaSalem show are $19 and may be purchased at the box office at One East India Square in Salem, as well as online at www.CinemaSalem.com.

“It will be funny, and people will walk away with knowledge even if they don’t intend to,” said Tony V., real name Tony Vivieros, a veteran standup comedian (Conan, Comedy Central) who has also built an impressive resume as a film actor. Included in that is a memorable scene opposite Melissa McCarthy in “The Heat” as a precinct officer who is verbally eviscerated by McCarthy’s crude and rude detective. He also appeared with Ben Affleck and John Hamm in “The Town,” and opposite Robin Williams in “World’s Greatest Dad.”

“Tony is a great interviewer and also a very inquisitive guy, which makes him great in this format,” said Paul Van Ness, CinemaSalem owner and a co-producer of the show. “In the first show, we cover chemistry, car repair, and self-help.”

He said the plan is to shoot the pilot, get feedback from the live show, and market it to networks with an educational interest.

“He hides it well, but Tony is smart,” Rattigan said. “He’s also great at communicating complex concepts in a clear way, and adding humor to the learning process.”

“With an educational segment, it’s important to establish your priorities in advance, and ours were, number one, humor; and number two, safety,” Vivieros said. “In the end, no one was badly hurt, and we all had a ton of fun. And I learned how to drench a friend without him knowing it was me that did it.”

“Tony V’s Project X” is, at this stage, a working title.

“I could tell you we wanted to create an air of mystery about the project, but really we just couldn’t think of a name,” Van Ness said. “We have a few other titles in mind, but if I shared that, there’d be no mystery.”

For more information, go to www.CinemaSalem.com.