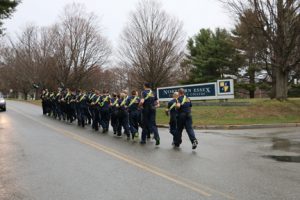 NECC now hosts a police academy as well as a training academy for the Essex County Sheriff’s Department.

The Spurk Building Renovations, the downtown Haverhill redevelopment, and the police and sheriff’s academies were just a few of the topics Northern Essex Community College (NECC) President Lane Glenn brought before the Haverhill City Council as a courtesy update Tuesday night.

Glenn was introduced to speak to the council by Councilor Mary Ellen Daly O’Brien, who is also a member of the NECC Board of Trustees.

He thanked the council for allowing him to speak, noting that there was nothing urgent to report nor was he making any requests. He wanted to inform the council on the most recent Haverhill campus updates.

The college, which opened in 1961 in the Greenleaf Elementary School with 181 students, he said, now has more than 4,000 on the 106-acre Haverhill campus with another 3,000 on the Lawrence campus.

When the Spurk Building reopens in 2017, it will be updated for accessibility and efficiency.

The buildings on the Haverhill campus are now more than 40 years old with no significant updates during that time, he said. Thanks to a $7.1 million capital bond and an additional $8.1 million in deferred maintenance from the state’s Division of Capital Asset and Management and Maintenance (DCAMM) renovations are underway. A fence now surrounds the Spurk Building which is off-line for about one year. Improvements to the building will include changes for safety and accessibility at the entrances and bathrooms, installation of central air conditioning, new windows, boiler and insulation and improvements to lecture hall A.

Despite being miles up the street from Haverhill’s downtown, Glenn said, NECC is proud to part of the Haverhill redevelopment. When Harbor Place, currently under construction at the intersection of Route 125 and Merrimack Street, opens its doors, students in NECC’s broadcast journalism classes will be taking classes in the first floor studios of HC Media.

“Just like 30 Rock” he quipped, referring to 30 Rockefeller Plaza in New York home of NBC studios, 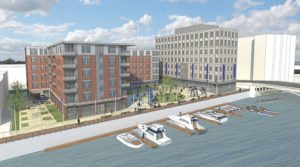 “And somewhere along the riverfront we are hopeful that we will soon be creating a new hospitality and culinary arts institute,” he said.

It would be a partnership among Northern Essex Community College, Whittier Vocational Technical High School, and Endicott College, to offer certificates, associate degrees, bachelor’s degrees, and graduate degrees for a number of hospitality and culinary arts careers in food service, hotel, travel, and tourism industries – some of the fastest growing employment sectors in the region.

“Our plan is to build out classrooms, laboratories, kitchens, and hopefully public meeting spaces and a restaurant where students can apply their skills,” he said.

Although the state legislature approved a $1 million line item toward funding this project, Governor Charlie Baker recently vetoed it.

“We are hoping for an override later this week,” Glenn said. 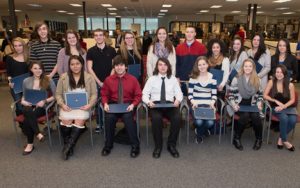 Other partnerships that Northern Essex has been cultivating include dual enrollment and early college programs. NECC already partners with Haverhill High School and soon with Whittier Vo-tech. At the start of their sophomore year, he explained, students can take classes that qualify for both high school and NECC college credit. Many students are able to graduate from high school with a year or more of college credits already completed, Glenn said.

“This can save the student a lot of time and money…making it more likely they will actually complete their college degrees,” he said.

“In June 2014, I learned from Chief DeNaro that the Haverhill Police Department would be hiring several new officers and they were expecting to have a difficult time finding training for these officers quickly enough and close enough to home,” Glenn said. “The same problem was happening in police departments across the Merrimack Valley and around the state.”

In June of last year, 46 cadets, including four from Haverhill, graduated from NECC’s first police academy and all went right to work in 20 different departments around the Commonwealth. Since then two more classes for a total of 119 cadets, 10 from the Haverhill Police Department, have graduated.

In addition, NECC is now providing Corrections Department Training for the Essex County Sheriff’s Department with 40 graduating from the first two classes and a new class beginning this September.

“We are now in the public safety training business,” he said.

Councilor Joseph Bevilacqua, whose late uncle Francis J. Bevilacqua, a former state representative, was instrumental in the founding of Northern Essex, said this forward thinking is exactly what his uncle and others envisioned…”creating opportunities for the middle class and lower income students to obtain a college education.”

The college was to be commended for its many partnerships, said Councilor Thomas Sullivan, a Haverhill attorney, who noted its affiliation with the Little Sprouts Child Enrichment Center, where his sister Maureen Bly is executive director; Opportunity Works, which is Northern Essex’s newest neighbor and temporarily houses several NECC departments; and the public safety academies.

“The academies have created benefits you may not even be aware of,” Sullivan said.

The recruits often train at Winnekenni Park Conservation Area which is a welcome sight for those using the park. It “shows community” Sullivan said.

Haverhill City Council President John Michitson said the police academies have helped the city overcome a crucial barrier to help get police on the streets.