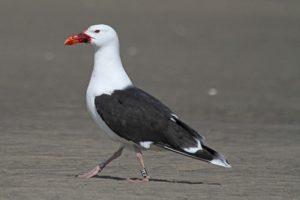 Gull 2E2 is frequently sighted by birders from Maine to Plum Island.

Charismatic and playful, the Great Black-Backed Gull is often seen by bird watchers during its regular commute from Appledore Island in Maine to Plum Island in Massachusetts where it feeds on fish and loots the coolers and blankets of naive sunbathers.

While some may call 2E2’s incessant squawking and egg sandwich stealing ways a nuisance, others, like a select group of Northern Essex Community College students call it research.

Supported by the NECC Fund, the students spend a week banding and measuring the gulls under the tutelage of NECC Assistant Professor of Natural Sciences Sarah Courchesne. The banding allows the gulls to be identified by birders who report sightings of the birds.

While it sounds a little like a reality television show – “The Gulls of Appledore” it is actually a reality research project that often leaves its participants bloodied and scratched, but always exhilarated.

Each May and July Courchesne travels to Shoals Marine Laboratory on Appledore Island with three or four NECC students who are selected based on a personal essay and teacher recommendation. The gull banding project has become increasingly popular; more than 30 NECC students applied for this summer’s week-long trip. 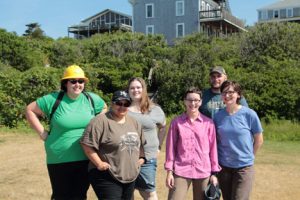 Courchesne, a trained veterinarian, became involved when Julie Ellis, the ecologist who founded the gull banding project persuaded Courchesne to co-teach a class on seabirds and later band gulls.

Each summer, while the gulls flock to the island to nest, volunteers band and measure 50 adult gulls and 300 to 400 young gulls in an attempt to track their flying, eating, and nesting habits. There is concern that the population of these seabirds has dropped significantly since the 70s and 80s.

“There is something magical about seabirds,” says Courchesne. “They are so intelligent and so clever. They have to be adaptable to find food sources.”

The volunteers have to be equally as clever in catching the gulls.

“The process is a little bit zany and kind of tricky,” says Courchesne.

The tracking helps identify vital bird and ocean health, while giving the students experience outside the traditional classroom.

“I learned a lot more than I was expecting and was able to gain some experience in field research,” said Eric Lanouette of North Andover, a biology major. 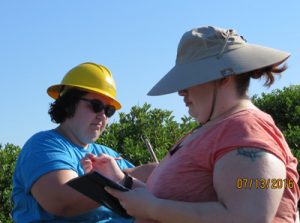 Nathan Kozlovski, of Atkinson, NH, a physical science major at Northern Essex, says the experience gave him the opportunity to work with wild animals in a natural setting.

“I learned much about the nuances of behavior that can widely separate two closely-related species cohabiting in close proximity,” he said.

“I learned many skills, like patience and methodical approach,” said Cesar (Davis) Mesta, a lab science major from Haverhill. “That could only be learned by working in the field.”

The young gulls, are easier to catch since they haven’t mastered flying. Caught with a fabric bag, one volunteer holds the gull and pins its wings, while another volunteer slips a green band on the Herring Gulls and a black band on the Great-Black-Backed Gulls. Each band bears a set of numbers and a letter printed in white. The adult gulls are banded in a similar fashion although they are caught by a box-trap, placed above their nests. Once banded, the gulls can be tracked through re-sightings.

For recent Northern Essex biology grad Jamie Zananiri of Bradford, who is headed to Oregon State University in the fall to study wildlife biology, the gulls of Appledore changed her life so much so last year that she returned this year.

“…The opportunity to go to Appledore as a field research assistant last spring allowed me to see what field research could actually consist of … and how hard I could push myself when the situation called for it. Being able to work with professionals in the field, as well as pick the brains of the other professionals at Shoals Marine Lab, was incredible.  It reaffirmed the career path I want… Despite the difficulties, like spraining both ankles and getting first hand knowledge of just how powerful Greater Black Back gull bites are, I wouldn’t have missed it for the world.” 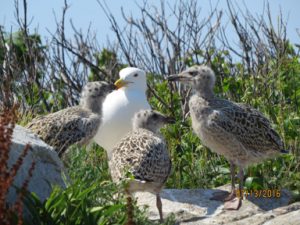 Great Black-backed Gulls, one of the study species at Shoals Marine Lab on Appledore Island. The present gull study began in 2004 and builds upon prior studies conducted on Appledore.

The gulls and their travels are chronicled through the efforts of volunteers who Courchesne good-humoredly refers to as “bird nerds” of which she counts herself as one.

“We are totally reliant on the public to track these sea birds,” she says. “They have been tracked as far as Indiana, Texas, and Florida. We have really amazing, dedicated volunteers who visit our website and upload detailed information on a banded gull they have sighted.”

All the gull data is archived for anyone to use says Courchesne.

“Gulls represent a bridge between the land and the ocean. They are so ordinary and so accessible. Yet they are really interesting in tying two environments together. They can tell us about seabird health and ocean health,” she says.