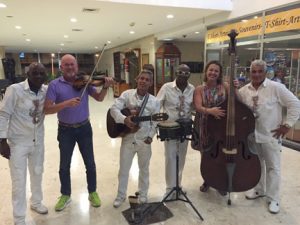 A June trip to Cuba may have been Northern Essex Community College Professor Ligia Domenech’ s third trip to the mysterious Caribbean country, but it most assuredly won’t be her last.

The Haverhill resident who, for six years, has been teaching various history courses at Northern Essex including Contemporary Caribbean History and authored a book on the U-boat blockade of the Caribbean during World War II, recently spent 10 days in Havana, Cuba, weaving together a trip of both business and pleasure.

As a member of the Association of Caribbean Historians Domenech presented at a poster session titled “War, Peace, and Propaganda”. Her presentation was titled “Surviving the WWII German U-Boat Blockade of the Caribbean”.

Domenech first visited Cuba in 1982 with her family. She returned last December with her husband, and was happy to be returning just six months later.

In addition to attending the five-day conference, Domenech taught a course at the University of Havana to international history students; was interviewed in both English and Spanish for Radio Havana; attended a farewell party for educational experts who are restructuring Cuba’s educational system; visited with friends; and absorbed as much of the music, food, and culture as she could.

Among other things, she learned that the Cuban people are not concerned about the country becoming overrun with American franchises. They trust the government to keep outside influences in check; the government is restructuring its K through 12 education system to place a strong emphasis on teaching English, Science, and Math; Miami businessmen have wasted no time in investing in small restaurants and businesses; everyone has a cell phone even though wi-fi is spotty; tourists use Cuban Convertible Pesos (CUC) and not the Cuban Peso (CUP) which natives use. One CUC is worth 25 CUPS; the government owns all the banks; and the Cuban people are magnanimous with their time and knowledge.

Domenech, who is a member of the NECC Speaker’s Bureau, will soon offer a new lecture on Cuba titled “Cuba Today”. She already offers lectures titled, “The Cuban Embargo and Why it Happened,” “The History of U.S. Immigration Policies,” “Understanding Hispanic and Caribbean Culture,” “India: It’s Not What You Think,” and “Understanding India, Land of Contrasts”.