Students Get Taste of STEM Options During Technology Camp 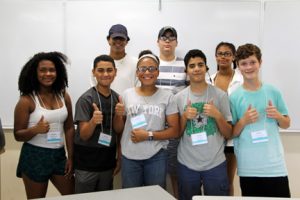 The Microscopes – campers in Engineering Professor Paul Chanley’s class give a thumb’s up at the end of their day at Technology Camp.

On Thursday they cooked s’mores in solar ovens made from shoe boxes.

These are just two of the many science, technology, engineering, and math (STEM) exercises that the 34 Haverhill, Lawrence, and North Andover students have participated in during the three-week technology camp funded by the STEM Starter Academy Grant.

The intent of the camp is to familiarize students in grades seven through 10 to the principles of science, technology, engineering and math, as well introduce them to a college campus and its faculty. Divided into groups with catchy STEM names like the Algorithms, the Pixels, and the Microscopes, they have attended two, 90-minute sessions with a break in between, Monday through Thursday from 9 a.m. to 12:15 p.m..

The grant, from the Massachusetts Department of Education’s STEM Starter Academy, which is an initiative of the 15 Massachusetts community colleges to inform, engage, recruit, retain, and graduate more students in science, technology, engineering, and math, through STEM Pathway programs leading to job placement or transfer to university STEM programs.

The attention to STEM seems to be working.

In Room 130 of the Hartleb Technology Center on the Haverhill campus, Engineering Professor Paul Chanley, wearing a straw fedora, was bent over a piece of graph paper. Campers Ryan, Ruben, and Esmerelda intently followed his red pencil as he reviewed the data they collected and plotted to find the slope to compare to Ohm’s Law.

The students, ages 12 to 15, said Chanley, are attentive and interested. The very age group the initiative is trying to target.

Ryan Brito, 13, of Lawrence, said he enjoys the camp because of the many activities.

“It makes the day fun. If I wasn’t here, I would have nothing to do,” he said. “I’m thankful for the opportunity.”

“It’s been really fun,” he said. “We can’t do this kind of thing at home or anywhere in Lawrence. If I wasn’t here I would probably be sleeping.”

“This has been a great learning experience,” said Licinia Russo, 13 of Lawrence. “I’m doing things here that I would never be doing at school like using the 3D printer and processing crime scenes.”

“You have to be a certain kind of student to dedicate three weeks to a technology camp,” Pelletier said.

“We were looking for an opportunity to connect with this age group of kids in our service area,” said Carolyn Knoepfler, assistant dean of science, technology, engineering and advanced manufacturing.  “The camp is twofold. The students are exposed to STEM ideas like 3D printing and forensic science with the opportunity to visit a real college campus and connect with faculty.”

The students were recruited for the camp via flyers distributed to area charter schools, Boys and Girls’ clubs, and YMCAs. To keep the students engaged, Knoepfler said, she hopes to arrange additional visits during the school year and hold the technology academy in July next year.

The entire camp experience including transportation by bus from the Dimitry Building in Lawrence, to supplies, and snacks is funded by the STEM Starter Academy Grant.

The parents of the campers were just as excited about the Technology Camp.

“Any time you get children on college campuses is time well spent,” said Knoepfler. “It’s good for them to know what college is about and that it’s a comfortable environment to be in. They can begin to imagine ‘who they can be’.”

The camp culminates Thursday, August 18, with a magic show by Professor Mike Cross followed by a cookout.

For additional information on the Technology camp contact Carolyn Knoepfler at cknoepfler@necc.mass.edu 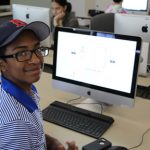 Ryan Brito of Lawrence works at Sudoku during Technology Camp. 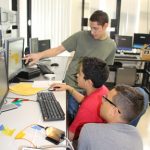 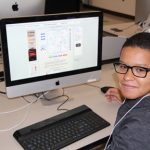 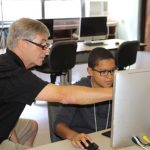 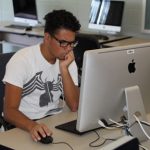 Joshua Robles of Lawrence works on a project during Technology Camp. 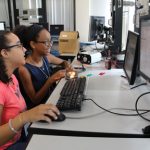 Camille Lopez (rear) of Lawrence and Daniela Rosario of Methuen measure the speed of sound..