Lawrence Man Gets Serious About Education at NECC 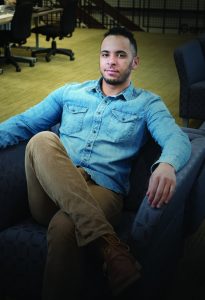 Carlos Rivera admits he was a less than serious student while attending Lawrence High School. The 2011 graduate enrolled at Northern Essex only because his family insisted that he go to college.

His less than stellar grades continued after he came to college, and, as a result, he was disqualified from playing on the college’s basketball team.

“I was focused on my social life,” says Carlos. “School just wasn’t important to me.”

After coasting along for a couple of years, earning some passing grades, Carlos had an epiphany. “I decided I needed to make a change,” he says.

Carlos discovered that when he applied himself to his schoolwork he could get good grades, even in challenging courses like chemistry and calculus II.

He also found he had a talent for teaching others. For the past year and a half, he has focused on tutoring his peers, both as a supplemental instructor in College Algebra and Trigonometry and as a student assistant in the Student Success Center in Lawrence, where he helps students with math, algebra, and biology.

He found his direction, combining his two passions, psychology and biology, and deciding on a career in neurobiology.

After graduating from NECC with an associate degree in liberal arts, psychology and biology, Carlos will transfer to UMass Lowell where he will major in biology and psychology.

“Northern Essex allowed me to get on track academically,” he says. “It prepared me well for transfer to a four-year university.”

After receiving his bachelor’s degree, he plans to apply to medical school. Carlos’s college journey has not been a smooth one, but he has proven through hard work and persistence it is possible to succeed.

To learn more about enrolling at Northern Essex for the spring, visit the website or contact Enrollment Services at admissions@necc.mass.edu or 978-556-3700.