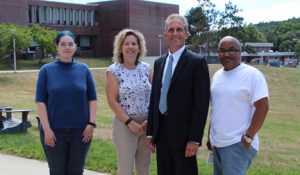 Holden-Gouveia, a professor in NECC’s computer and information sciences (CIS) program for the past 10 years, was nominated by several faculty and staff, who praised her for excellence in teaching and devotion to her students and their success.

Joyce Brody, an administrative assistant in NECC’s Division of Technology, Arts and Professional Studies, wrote “She employs her skills and knowledge to assist in creating and nurturing connections between NECC and tech workplaces that provide opportunities for our students to explore, demonstrate skills, and succeed.”

Michael Penta, computer and Information sciences professor, supported the nomination stating, “…she has demonstrated an excellence in teaching and curriculum development, a commitment to developing her craft as well as her content knowledge, and a focus on student success… Adrianna is extremely committed to her craft. She is constantly modifying curriculum and classroom procedures looking to engage students and encourage their growth… She aims to create a real pipeline for success with her work in the areas of career preparation and advising. Adrianna created a long-standing career prep day that includes mock interviews, dress for success workshops, and resume reviews.”

“As a former student of Adrianna’s, I can speak firsthand about her empathy for students,” wrote CIS instructor Jason DeCosta, who was in danger of failing her class as an undergraduate. She recognized his abilities and helped him with his deficiencies. “I got an A on the final exam and finished my first semester of college with a 4.0 GPA.”

Ashley Moore, director of career and experiential education, works closely with Holden-Gouveia. She wrote “Together we have built an academically-sound internship program from the ground up for students in the computer information science program. This endeavor has required Adrianna to dedicate hundreds of hours toward student enrollment, collaborative relationships across internal departments, and fostering external partnerships. It has also required Adrianna to demonstrate entrepreneurial skills in order to build and grow this program, tweaking it constantly to improve the program’s quality and the students’ experience.”

Holden-Gouveia earned Bachelor of Arts degrees in Mathematics and Computer Science from Clark University and a Master of Business Administration from Rivier University.

McDermot, director of academic affairs operations, is an 18-year employee of Northern Essex. She was nominated by several staff members who all praised her for her leadership and organizational skills.

Christine DeRosa, program manager for NECC’s Center for Corporate & Community Education, wrote, “Sharon continues to amaze with her many strengths and talents in an increasingly demanding role… she has been instrumental in addressing the Spurk renovation undertaking in terms of re-locating academic personnel to other areas of the college, including to the Riverwalk campus.”

Her nomination was supported by Jane Bailey, staff assistant in academic and students affairs; Linda Fagan, administrative assistant in academic and student affairs; and Clayton Ross,  facilities engineer/project manager; as well as Bill Heineman, vice president of academic and student affairs who wrote, “I could write 100 pages about why (she) deserves the Employee Recognition Award and would still be leaving out important contributions she makes to the college…Over the last year, she has carried a huge burden in organizing the movement of Academic and Student Affairs offices and classrooms from the Spurk Building to multiple other sites. In doing so she has been efficient, creative, calm, persistent, and extremely flexible as plans have evolved and developed over time. She has kept an amazingly positive attitude amidst a great deal of challenge and stress.”

Suero, a 20-year employee of Northern Essex and senior computer technician in IT Services was lauded for working swiftly and efficiently during the recent move of the liberal arts division as a result of the Spurk Building renovation.

He earned a certificate in computerized business systems from the Computer Learning Center in Methuen.