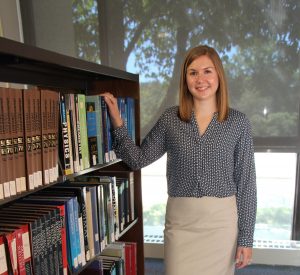 Even as an undergrad studying history at the University of Illinois, Laura Mondt enjoyed the satisfaction that came with using her sleuthing skills to research a paper.

Now the born and raised Midwesterner is sharing her honed researching abilities with Northern Essex Community College students as the new reference librarian in the Harold Bentley Library on the Haverhill campus. She replaces Gail Stuart who retired this summer after 35 years as an NECC librarian.

Mondt worked in the NECC library on the Lawrence campus since February of this year. Prior to moving to New England, she was the reference and instructional librarian at Richland Community College in Decatur, Illinois, for more than three years.

While the location and accents may be more than 800 miles apart, the 30-year-old sees her role and involvement at Northern Essex similar to that at Richland; she is both a navigator and evaluator of information.

“I like the community college environment,” the Andover resident says. “There is a nice mix of academics and research yet it offers aspects of a public library, like finding a book for the recreational reader or helping someone needing a little technology help or simply trying to navigate the website.”

This is a skill set, she says, that is a carryover from her days as a computer monitor at her public library, which leads to how and why she became a librarian. While history was her major in college, her experiences patronizing and volunteering at the local public library influenced her to pursue a minor in information technology studies.

“It certainly gave me a sense of what working in a library would be like,” she says. “This work appealed to me because I work with the public and help them figure out what they need and want and help them research it. I’ve always enjoyed the research. I learn so much researching topics with students, but then I don’t have to write the paper.”

When Mondt graduated from the University of Illinois with her master’s in library science and a graduate certificate in archival studies, the recession had a stronghold on the economy. Mondt, didn’t capitulate to the economy and instead continued her education earning a master’s in history at Eastern Illinois University.

All of which has led to her light strewn office on the first floor of the library where she works from a new “standing desk”… a subtle indicator that libraries and their staff are changing.

While libraries continue to evolve, the 21st Century librarian’s role has not changed entirely, Mondt says.

“We are still navigators of information,” she says. “But now we find the information hidden behind a paywall or buried in a library database. We help (them) find alternative resources not just Google. We tell them ‘Don’t just do one search.’ We also show them how to evaluate the information they find. They need to learn to vet the source.”

As satisfying as the search in research is, Mondt says she is equally pleased when students return and thank her for helping them find just the right source to “tie a paper together”.

“Knowing that what you are doing is helping them is nice,” she says.

When Mondt isn’t working, she is adjusting to life in the Merrimack Valley and is grateful for its location to the White Mountains and Atlantic Ocean. In fact, she will participate in her first “Reach the Beach,” Road Race this fall. It helps take the sting out of the longing she has for “real” deep dish and thin crust pizza.