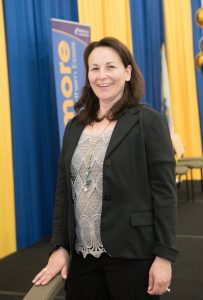 The 48-year-old mother of three was one of more than 1,000 graduates to receive associate degrees or certificates during Northern Essex’s 54th Annual Commencement Exercises on Saturday, May 21, on the Haverhill Campus.

When Conrad and her husband relocated to the United States in 2002 for his job, she left behind more than family and friends. She left her German preschool teacher training and began the life of an immigrant. She enrolled in English as a Second Language classes and perfected her English while raising their family.

When Conrad started thinking about returning to the work force, teaching seemed like a natural fit, but after volunteering at a charter school for grades five through twelve, she thought about expanding her options. In the fall of 2013 she enrolled at Northern Essex and found she gravitated toward human services. It was a field, she decided, where her eclectic people skills could make a difference.

While studying in the Human Services Program, Conrad completed an internship at the Senior Center in Amesbury. She learned something new about herself: she really enjoyed working with the geriatric population. Today she works as an activity assistant for a Benchmark Senior Living facility in New Hampshire and is also a relief staff person for an area psychiatric group home.

“I’m excited about my human services career,” she said. “I’m happy to be doing what I’m doing. I would do it all again. I’m a helper. I like working with people and helping them any way I can.”

But her story isn’t over. Conrad’s next chapter starts this fall when she begins taking classes toward a bachelor’s degree in social work at Salem State University.

“I have a meaningful position, but now I’m hungry for more knowledge,” she says.