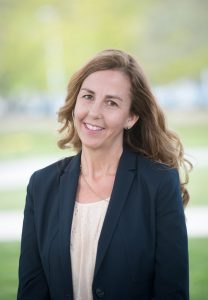 When Sheri L. Carter received her associate degree in business management: healthcare practice option during Northern Essex Community College’s May graduation, it had already helped her land a job at one of the largest healthcare systems in Boston.

The road to Carter’s associate degree with honors actually began in 1990, shortly after her graduation from Salem High School in NH. An early marriage and four children pulled her attention from her education as she focused on raising her family and wore the many hats of Girl Scout leader, den mother, cheerleading coach, and elementary school volunteer.

Carter enrolled at NECC a few times, but her children’s schedules and her three, part-time jobs took precedence. In 2009, once her children were older, Carter decided it was time to focus on her own education. She enrolled in two or three classes each semester not quite sure which direction she wanted to study. She was hired as a medical secretary, which lead to a position with a Steward hospital where she became certified as an optimization specialist. Her experience and her NECC education eventually led to the job at Partners, she said.

“The career found me and I developed a passion for it,” she said.

After her return to NECC, Carter earned a 4.0 GPA every semester and embraced her role as a college student. The 45-year-old, nontraditional student, who also earned a certificate in Electronic Health Record Specialist, was a member of Alpha Beta Gamma Omicron, the international business honor society; a member of the iHealth Advisory Board; and a member of the NECC Student Leadership Development Program.

One of the doors it opened was to Southern New Hampshire University, where she will begin studying part-time for her bachelor’s degree in business management: health care information.