Fall Semester Kicks Off with Convocation 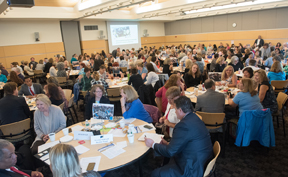 Growing Grads and Bucking Trends was the theme of the Fall 2016 convocation attended by hundreds of Northern Essex Community College faculty and staff on Tuesday, September 6, in the Hartleb Technology Center.

With that in mind, NECC President Lane Glenn shared a personal story of his brother’s recent graduation from an MBA program before turning the tables on attendees to participate in an ice breaker and share a personal graduation story with someone sitting near them. A few employees volunteered to tell their tale including Brianne McDonough, Guided Pathways to Success in STEM Program manager, who recalled that she and her mom graduated from Bridgewater State University on the same day.

Following the ice breaker, President Glenn went on to share the dais with a number of staff and faculty who updated their colleagues on recent NECC events not the least of which was the declining enrollment and what NECC is doing to boost numbers now and in the future.

Here are a few of the highlights: 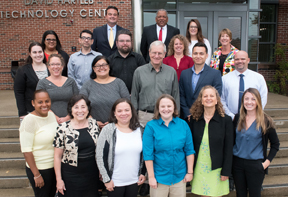 There will be many new faces on campus this semester as well as familiar faces assuming new or additional roles. 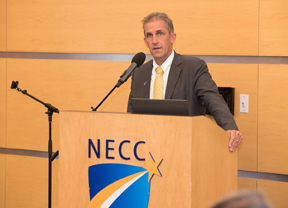 Faculty members Jody Carson and Sue Tashjian gave a quick overview of Northern Essex’s use of Open Educational Resources (OER). To date, 35 NECC faculty members have employed OER in their classes, resulting in $650,000 textbook savings. Now, Carson and Tashjian, who are coordinators of the statewide OER program titled Massachusetts Community Colleges Go Open, put out a call for proposals to encourage other faculty to become involved. They invited NECC faculty to apply for the first round of grant funding to help them incorporate OER in their classes.

Before introducing Michael Pierce, director of administrative services, President Glenn joked that while Boston had the “Big Dig”, Northern Essex has the “Spurk Renovation”, which he said is a “Herculean” undertaking.

Pierce supported his comments showing slides of a now vacant Spurk classroom building. He said that some 500 student desks, 200 filing cabinets, thousands of chairs and hundreds of boxes were moved off the property are currently stored in sheds, storage containers, in Haverhill, Riverwalk and Lawrence campuses.

The year-long renovation will be worth the bother, he said, since it is creating a “more comfortable learning and teaching environment”.

Additional information on renovations can be found here.

Dawna Perez, dean of student success, speaking on behalf of Janel D’Agata-Lynch, NECC’s civic engagement and service learning coordinator, said that since the Massachusetts Department of Higher Education voted two years ago to include “civic learning and engagement as an expected learning outcome in public higher education” NECC has been actively working with its faculty to incorporate these components into their curricula.

The idea, said Perez, is to create “good citizens”.  She encouraged faculty to reach out to D’Agata-Lynch if they believed their course meets the criteria for service learning designation. 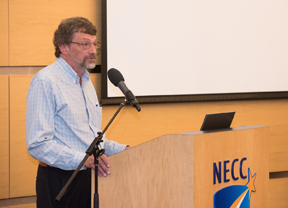 Steve Russell informed the attendees of the up coming Teach-In.

History Professor Steve Russell, advisor to the NECC Contemporary Affairs Club, spoke regarding NECC’s involvement in the 2016 Election Teach-In, which is a statewide effort to educate students on the importance of the election and why their vote matters. A total of 10 NECC faculty members have already committed, but Russell said there is always room for more.

“Part of civic learning is actually voting,” he said. “Getting students engaged and rationally understand what’s going on with this P residential election is important.” He quoted Thomas Jefferson who wrote, “If a nation expects to be ignorant and free, in a state of civilization, it expects what never was and never will be.” Russell says the 2016 Election Teach-In “puts teeth in it”.

Among other activities, students will be invited to participate in weekly Collegial Conversations, mock presidential debates, and voter registrations. To participate or for more information contact D’Agata-Lynch at jdagatalynch@necc.mass.edu 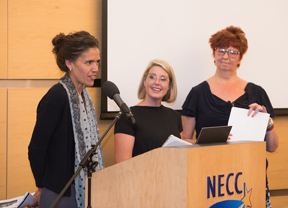 Professors Lizzie Casanave, Elle Yarborough, and Barbara Stachniewicz gave a brief presentation promoting NECC’s long term and short term study abroad programs. Students who participate in study abroad programs “experience the viewpoints and cultures of other countries…they share this with their peers and inspire others to travel…they realize education is not a process that happens in a classroom, but an experience to be lived,” said Casanave in a voice over during a short video featuring NECC students on study abroad trips.

Two trips will be offered this year – England and Belize. For more information contact studyabroad@necc.mass.edu or call Casanave at 617-281-3331.

Stachniewicz introduced the Global Scholars Program, which is a transcript designation program that recognizes a student’s work as a “global citizen”.

“We live in a globalized world and NECC is making choices to face this head on by supporting you as a globalized student,” according to a brochure introducing the program. “This program recognizes all the work students are already doing while connecting them with others who are growing as global scholars.”

President Glenn reported that community colleges historically experience enrollment decreases when the economy is improving.  That trend, combined with fewer students of high school graduation age (particularly in the Northeast), competition from other colleges, and changes in the ESL developmental education curriculum, has contributed to a drop in enrollment at NECC.

Even though numbers are down, Glenn noted that all is not bleak:

•      The average enrollment at Massachusetts community colleges between 2004-2015 accounted for 50.6* of all public higher education enrollment

Bill Heineman, dean of student and academic affairs, Michael McCarthy, vice president of administration and finance, Noemi Custodia Lora, executive director of the Lawrence campus and community relations, and Ron Taber, vice president of marketing and communications, and Tina Favara, dean of enrollment services and interim dean of student life, all spoke on what their areas are doing to improve enrollments and student retentions as well as budget shortfalls.

Heineman said that “micro-gains” have been noticed in course completion in math sections where students used supplemental instructors.

McCarthy noted that human resources have played a role in keeping costs down. Jobs have been merged and there have been delays filling job vacancies. Other measures include one-time savings through rebates and grants and IT contracts have been renegotiated as have rates from various vendors.

International students are another group Northern Essex is cultivating by making a number of changes including: giving credit for valid foreign credits; offering the Accuplacer test in the Dominican Republic; secure scholarships from the Dominican Republic Ministry of Education; develop study abroad programs.

Taber spoke of the “lost customer” and the importance of using analytics to refine tactics and improve “return on investment”.

Turning more applicants into enrollees is the number one goal, according to Favara. Enrollment will work to increase the number of Hispanic males who are over 25; increase the traditional high school student; strengthen Communiversity and four-year transfer programs; and expand international recruitment.

Burns spoke on creating a “culture of leadership” for student success that involves becoming a “student-ready college” through learning together, continually improving, and developing leadership at all levels.