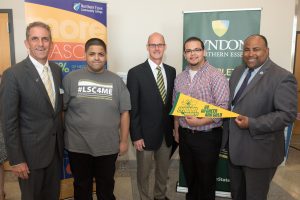 When Jean Carlos Diaz graduated from Lawrence High School in 2013, he chose to pursue an associate degree in computer science close to home at Northern Essex Community College.

Thanks to a partnership announced on Wednesday, September 14, between Northern Essex and Lyndon State College of Vermont, students like Diaz can now complete a bachelor’s degree without leaving the city.

The first in his family to go to college, Diaz said, “I was worried about going to a four-year college and being far from home.  I feel very fortunate to have the opportunity to experience college right where I live.”

As of this fall, Lyndon State is offering bachelor’s degree programs at NECC’s Lawrence Campus in computer information systems, music business and industry, and visual communications.  Classes will be taught afternoons and evening at 420 Common St., or in a hybrid format, which combines online learning with traditional classroom classes. 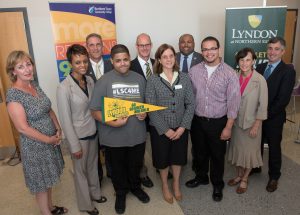 “We have a small but mighty first class this fall,” said Dr. Kristin Hunt, Lyndon State College site director at NECC.  “I could not be more thrilled with our first group of students.”

With 1,200 students, Lyndon State College is one of five institutions that comprise the Vermont State College system, according to President Atkins.   Atkins said that Lyndon State focuses on experienced-based education and students are encouraged to complete an internship, typically during their senior year.

Expanding higher education options for Greater Lawrence residents is a priority of President Glenn, which is why he approached Lyndon State about a partnership two and a half years ago.

According to Glenn, 13* of Lawrence residents have a bachelor’s degree as compared to close to 50* of the population statewide.  “It’s about making all the people in the service area we touch successful,” he said.

Mayor Rivera thanked both colleges for their efforts on behalf of his city.  “Lawrence is one of the few gateway cities of its size that doesn’t have a four-year university,” he said.  “Lane is making a Herculean effort to fill that gap, and it’s much appreciated by the city.” 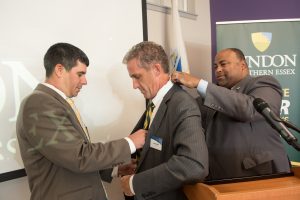 At the start of the program, President Lane Glenn (center), who was wearing a blue and gold tie in Northern Essex’s colors, switched ties with Lyndon State College’s Director of Admissions Vincent Maloney (left) who was wearing a green and yellow tie in his college’s colors. Mayor Rivera helped with the symbolic gesture which showed that this is a “full partnership” according to Glenn.

This partnership comes on the heels of a partnership between Northern Essex and Regis, a leading Catholic University that was announced last November.  Since last fall, Regis has been offering bachelor degree completion programs in nursing, public health, and health sciences at Northern Essex’s Lawrence Campus.