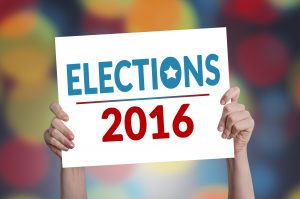 Northern Essex Community College is using this year’s election as a teachable moment, planning a series of events during the month of October designed to educate the college community about the presidential election and other important election issues.

As part of the college’s Election Teach-In, local elected officials will visit the college to discuss the importance of being civically engaged; the public will be invited to a series of events, including “NECC’s Own Big ‘Presidential” Debate’”, at which faculty members will debate representing all four candidates for president; and faculty will incorporate the election into their course curricula.

On Monday, October 3, Haverhill Mayor James Fiorentini will share why it’s important to get involved in the political process with a presentation titled “Why Should I Vote.”  This presentation will be held from 11 a.m. to noon in the Hartleb Technology Center, Room 103B, Haverhill Campus, 100 Elliott St.

On Tuesday, October 18, the discussion will move to Lawrence when Lawrence Mayor Dan Rivera shares his thoughts on civic engagement from 8 to 9 a.m. in the Dimitry Building, Room L244, 45 Franklin St., Lawrence.

Northern Essex will host its Own “Big Presidential” Debate on Monday, October 24 from noon to 1:30 pm. In the Hartleb Technology Center, Room 103B, on the Haverhill Campus.  Professors involved in the debate include Steve Russell, Steve Slaner, Andrew Morse, and Patricia Portanova. Katie Formosi of Groveland, a student and current president of the Contemporary Affairs Club will moderate; and Professor Paul Saint-Amand will serve as timekeeper of the debate.

Fifteen faculty have signed up to incorporate the election into their course curricula this year, according to Janel D’Agata Lynch, coordinator of civic engagement and service learning.  As examples, she shares the psychology class that will research the mental health platforms of the presidential candidates and the communications class that will study the role of the media in a presidential election.

The 2016 Election Teach-In is part of a state-wide effort to educate students on the importance of the election and why their vote matters.  It is supported by the Contemporary Affairs Club, the Global Studies Department, and Civic Engagement and Service-Learning.

Why Should I Vote? Hear from Haverhill Mayor Fiorentini  about the value of being civically engaged.

Ballot Question 2: Come, watch and discuss the UMass Debate on raising the cap on charter schools.

Ballot Question 3: Come, watch and discuss the UMass Debate on regulating the treatment of farm animals.

Technology and the Election; Hacking the vote: The security behind voting machine and elections.
Professor Adrianna Holden-Gouveia

Why Should I Vote? Hear from local politicians, including Lawrence Mayor Dan Rivera, about the value of being civically engaged.

Ballot Question 4: Come, watch and discuss the UMass Debate on recreational use of marijuana.