Afghanistan School for Girls is Subject of Talk 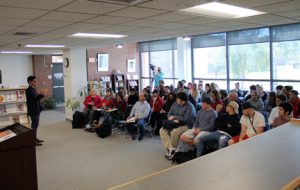 One of the primary reasons the girls of Afghanistan are not educated is because there are so few female teachers to teach them, a reality that the School for Leadership Afghanistan (SOLA) is working to change said Mati Amin, chairman of the school’s board who spoke to Northern Essex Community College faculty, staff, and students Wednesday in the Bentley Library on the Haverhill campus.

He spoke as part of NECC’s “One Geographic Region” Program which explores varying issues of the Middle East.

“For example, of the 3,800 teachers in one province, just 16 are female and only one has a high school diploma,” he said.

Shabana Basij-Rasikh, is president of SOLA, which she founded while still an undergraduate at Middlebury College.

This year, 22 sixth-graders and 14 high-school students live and learn in Kabul. SOLA plans to grow its enrollment to more than 340 girls, representing all provinces of Afghanistan in grades six through 12, within the next six years. Currently, SOLA rents two facilities in Kabul – one for classrooms and one for housing. The school is working with the Afghanistan government to obtain land that would allow it to build a new campus.

The education these girls receive isn’t without danger, Amin said. He cited one father who received death threats if he continued to send his daughter to the school. “We try to create an environment and engage the families so they will recreate a similar environment in their homes,” Amin said. “We work closely with families, especially the fathers. The success of SOLA students is dependent on the support of their families.” 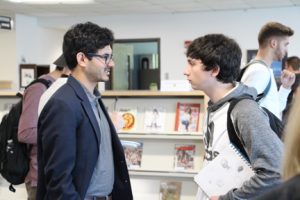 SOLA recruits from all provinces across the country. The students who represent Afghanistan’s many ethnic groups all sign a pledge that they will treat each other with respect and honor their diverse backgrounds.

The current curriculum used by most Afghanistan schools, said Amin, is based on memorization with no room for creative thinking, he said. SOLA is developing a curriculum it hopes the Afghanistan National Government will adopt in part or in its entirety.

In addition to receiving an education at the school in Kabul, Amin said, SOLA’s 14 high school students are paired with more than 30 tutors located throughout the world who meet the girls via Skype. SOLA’s 6th-grade students will also be paired with tutors once their English skills have progressed.

“In that sense,” he said, “they get exposure from around the world.”

Their education doesn’t stop there. To date 38 SOLA scholars have received scholarships to attend boarding schools and universities in the United States, United Kingdom, Canada, Jordan, Kyrgzstan, and Bangladesh. 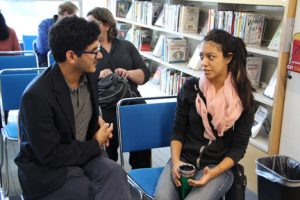 “This school gives these girls the opportunity and space for them to become who they are meant to be,” he said.

Armed with an education, these girls may become leaders, entrepreneurs, the head of nonprofits or government employees, Amin said.

“Change starts small,” he said, “Especially in a country like Afghanistan.”

Funding for the nonprofit school comes from individuals and private institutions primarily in the United States.

Amin is the holder of a Bachelor of Arts in Economics and Political Science from Williams College, Amin currently serves as the controller & systems manager at the Technical Training Foundation. He previously founded the Afghan Youth Initiative, a U.S. and Kabul-based nonprofit, and worked as a senior associate at Ashoka. A web developer by training, Amin also launched two startups, including a media solutions company. His extensive writing on development issues in Afghanistan have appeared in numerous publications including The New York Times, Foreign Affairs, The Diplomat, The Hill and USA Today.

During the 2016-2017 academic year the One Geographic Region program is highlighting the Middle East with speakers, films, and other programming. On Friday, Oct. 7, Dr. Bill Heineman, vice president of academic and student affairs, will present “The Middle East: It is not as Complicated as You Think from 1:30 to 3 p.m. in the Hartleb Technology Center; on Friday, November 4, Dr. Ligia Domenech will present Introduction to Islam: Some Basic Concepts” in the Dimitry Building in Lawrence from 2 to 4 p.m.; and on Friday, December 2, the film, “Wadjda” will be shown at Opportunity Works from 2 to 4 p.m.

This event was organized, in part, by Ann Grandmaison, NECC’s coordinator of research services.