NECC Performs Shakespeare this Weekend and Next 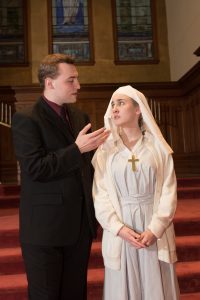 “Measure for Measure” is widely known as one of Shakespeare’s “problem plays.” It is a comedy in most of the traditional senses of the word, but it explores the sort of deeper, darker human dilemmas that were normally saved for the playwright’s tragedies.

The Northern Essex Community College Top Notch Players will perform “Measure for Measure” Friday and Saturday, October 28 and 29 and Nov. 4 and 5.  All performances begin at 7:30 pm and will be held at the Universalist Unitarian Church of Haverhill, 15 Kenoza Ave.

At the center of this play is the issue of a woman’s place in society, and the often crushing weight of patriarchal authority — two issues that Northern Essex Community College students found to be just as relevant today as they were in 1604, when the play was first performed. As such, they’ve opted to wear contemporary clothing rather than Shakespearian costume.

“This is certainly a play where we can find so many immediate parallels to our world right now,” said Jim Murphy, NECC theatre professor. “By doing it in contemporary dress, we find the audience is more readily able to see these parallels with current events.”

Available at the door, tickets are $10 for general admission and $8 for students and seniors.

On the crew, Claire Neville of Londonderry, N.H. will be stage manager; Sarah Durning of North Andover will be costumer; Nate Joyall of Groveland will be handling props; and Geehae Moon of Haverhill will be assistant director. 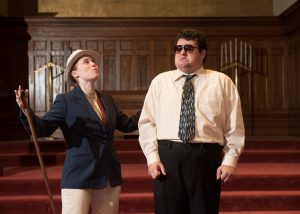 Unlike previous NECC productions, Murphy will not be handling directorial duties this time around; instead, professional director Danielle Howard of Dover, N.H. has stepped in to fill that role.