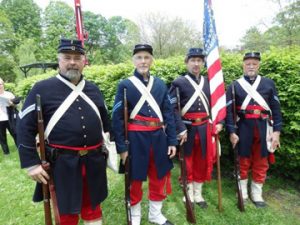 The event is free and open to the public.

On April 15, 1861, when President Lincoln requested that the northern states send 75,000 soldiers to the nation’s Capitol to suppress the rebellion, the people of Lawrence were more than ready to offer their assistance. In fact, the first soldier to fall mortally wounded during the Pratt Street Riot in Baltimore, Maryland, which marked the first deaths of the Civil War, was 33-year-old Sumner Needham of Lawrence.

Guard members Larry West and Dan Gagnon will discuss the young men’s involvement from the first bloodshed at Baltimore to the surrender at Appomattox Courthouse. A panel discussion will follow with fellow guard members Joe Bella, Elizabeth Charlton, and Sean Sweeney.

Through research into the lives of the Lawrence residents who served, to the beautification of Civil War soldiers’ grave sites, to public programs that educate the public about their service, members of the Lawrence Civil War Memorial Guard have worked to develop, enhance and support the preservation, education, and remembrance of Civil War history in, of, and about Lawrence.

For additional information or to be notified of upcoming events in the White Fund Enlightenment Series, contact Analuz Garcia at agarcia@necc.mas.edu or call 978-738-7423 or visit the website.