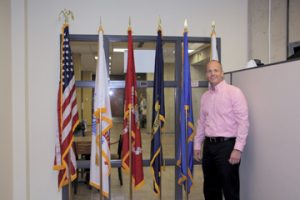 For the second year in a row, Northern Essex Community College has received the prestigious designation as one of the “Best for Vets: Colleges 2017” by the “Military Times”. It ranked 17 out of hundreds of colleges and universities.

Northern Essex is just one of 25, two-year schools nationwide to receive this honor and one of 175 colleges and universities to receive the designation overall. More than 500 colleges took part in this year’s survey. It was one of four Massachusetts community colleges to rank in the top 25.

If the rankings seem thin, they are for a reason.

“We limit our list to encourage competition, and we genuinely hope this helps raise the bar for veterans on campus,” said Amanda Miller, editor of “Best for Vets”. ““We award the Best for Vets designation to the very best – the colleges that really are setting the example.”

This rigorous data driven ranking is not an easy accomplishment, said Jeff Williams, director of NECC’s Veterans Services, upon receiving the honor last year. This year is no less exciting and still quite an honor, he acknowledged.

“I was nervous,” he admits. “I know how competitive it is, but once again I was pleasantly surprised.”

Williams believes Northern Essex maintained the designation for a number of reasons. He credits NECC’s Institutional Research department with compiling mountains of measurable data required by the survey. In addition, he believes the overall “quality of life” for NECC’s military-connected students continues to expand and improve. He cited the student NECC Veterans and Service Persons Organization, the veterans writing group, the dedicated veterans services office, the creation of “green spaces”, and voluntary faculty and staff training to address veteran-related issues and concerns.

“These trainings allow us to educate the college community as a whole as to the veteran student’s potential experiences, but also the strengths they bring to the classroom…we like to focus on their strengths.”

Williams said it’s important for faculty and staff to be educated on veterans issues because very often, after the initial meeting, he doesn’t see them until graduation.

“It’s the faculty who are working on the front line with these students,” he says.

“Military Times’” annual “Best for Vets: Colleges” survey asks colleges and universities to meticulously document a tremendous array of services, special rules, accommodations and financial incentives offered to students with military ties; and to describe many aspects of veteran culture on a campus. These institutions were evaluated in several categories, with university culture and academic outcomes bearing the most weight.

“Prospective NECC student veterans and military-connected students won’t find the “Best for Vets” logo on every school website they visit,” said Williams. “The fact NECC proudly displays acknowledgement of its ranking lets them know that they can find the supportive campus environment necessary for their academic success.”

As with all Best for Vets rankings, Best for Vets: Colleges 2016 is an editorially independent news project that evaluates the many factors that help make colleges and universities a good fit for service members, military veterans, and their families.

The rankings were published online at MilitaryTimes.com, as well as ArmyTimes.com, NavyTimes.com, AirForceTimes.com and MarineCorpsTimes.com and appeared in full in a special magazine issue of Military Times on newsstands in mid-November. The release of this year’s list also marks Military Times’ inaugural declaration of the month of November as Veterans Month. The independently owned media company is celebrating veterans beyond Veterans Day, with 30 days of veteran-focused coverage.