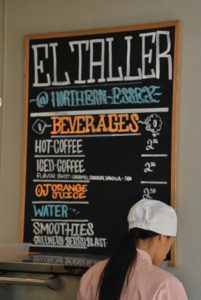 El Taller@NECC offers something for everyone.

Where can you enjoy contemporary Mexican and Dominican influenced food prepared by a Cordon Bleu trained chef? At the new “El Taller @ NECC” food bar in the atrium of the Dimitry Building on the Lawrence campus.

The food bar, which had a “soft opening” this week, is operated by Eric Guerrero who is second generation restaurant royalty in Lawrence. More than 20 years ago his parents Antonio and Mary Guerrero opened Café Azteca on Common Street in Lawrence, which serves traditional, homemade Mexican food. The 27-year-old Guerrero, is a “restaurant kid” who under the tutelage of his parents, four years ago opened the now wildly popular “El Taller”, which combines good food, community, and books. The café bookstore also regularly hosts poetry and book readings and monthly art exhibits.

“El Taller @ NECC” is an extension of the community-minded Essex Street café. The modified menu is ideal for a student budget. Smaller, affordable portions of favorite menu items like pan con queso and mollete, both of which are made with bread from Lawrence’s own Tripoli’s bakery, and sopa de fideo. 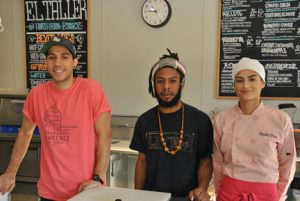 Alongside Guerrero is 20 year-old Lawrence native Tayisha Diaz now of Bradford, a student at Le Cordon Bleu College of Culinary Arts in Boston, who is fulfilling her three-month externship with El Taller@NECC and Nate Baez, a self-employed local writer and community innovator.

Guerrero, created a menu with healthy alternatives in mind like the two smoothies they designed called “The Greenery” and “The Berry Blast”.

“The vibe and culture we’ve created at El Taller is what I want to bring to this space,” Guerrero said, as 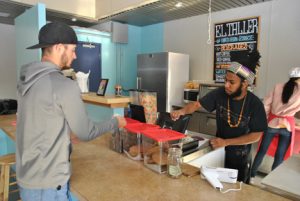 Spanish music played in the background. “These students deserve the best. We are talking to them to learn what they want. We want it to be a community space. We want to offer healthy food so they are engaged and focused in class and not sluggish.”

In addition to offering popular food items, he hopes to have a small gallery that will feature works of local artists – possibly NECC students; a full size screen to project TED talks; and community workshops.

“This is a great collaboration between NECC and El Taller and the Guerrero family,” said Martha Leavitt, director of NECC’s campus operations and procurement.

For additional information contact Leavitt at mleavitt@necc.mass.edu or (978) 738-7403. Guerrero can be reached at https://eltallerarts.com/contact/ or eric.e.guerrero@gmail.com.