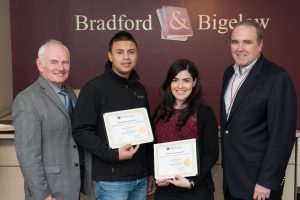 Cesiah Albarran of Lawrence came to this country in 2013 from Puerto Rico with a recently earned bachelor’s degree in chemical engineering from the University of Puerto Rico and limited English skills.  With the help of family members, she quickly landed a job with Bradford & Bigelow (B&B), a $31M specialty printing company with 140 employees in Newburyport, working as a helper in manufacturing.

Today, thanks in part to a workplace English program provided by Northern Essex Community College and funded by a state grant, Albarran has been promoted to account manager at Bradford & Bigelow, where she is communicating regularly with customers, using her newly honed English skills.

“I spoke a little bit of English when I came here but it was English learned from books.  Participating in this program gave me the confidence to communicate in English,” said a brightly smiling Albarran.

On Monday, November 21, Albarran and the other 18 Bradford & Bigelow employers who completed the year-long, 220-hour English language program were recognized at a graduation ceremony held at the Newburyport headquarters.

The Workplace English program that Albarran benefited from was paid for by a $246,762 Workforce Training Fund grant from the state’s Commonwealth Corporation which Bradford & Bigelow received in late 2015.  In addition to funding Workplace English for employees, the grant also covered sales training, effective supervisory management skills, Microsoft Office Suite 2013 and technical training.  It was the largest grant in Massachusetts’ state history given to a printing company, according to Company President John D. Galligan, who spoke at the ceremony. 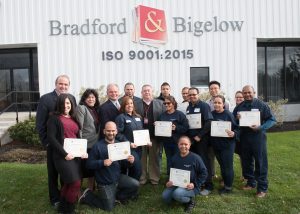 “As one of the first ISO 9001: 2015 and G-7 certified suppliers in North America, continuous training and improvement is part of our DNA,” said Galligan, who adds that his company has invested $10M over the past three years in the most advanced equipment available in their markets.

Bradford & Bigelow’s clients are national and international in scope and the company competes successfully against some of the industry giants. “Our goal is always same: we want to be a best in class supplier not the biggest.”

Another key to B&B’s success is the low turnover, says Galligan.   “We measure employee tenure in terms of decades not years.”

The low turnover can be attributed to the benefits that the company provides, says Tara Howley, HR manager.    Those benefits include continuous training, excellent wages benefits with health and dental insurance, 401K contributions and plenty of overtime.”

The company also is a family affair attracting many employees who are related.  The Workplace English class, for example, included two married couples, an aunt and niece, and sisters and brothers. 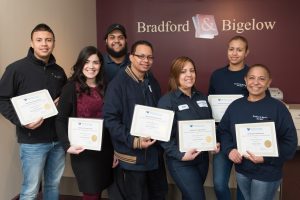 Six members of this family graduated from the Workplace English Program. Shown left to right: husband and wife Maximo Rodriguez and Cesiah Albarran, Guillermo Vargas (He’s Andy’s son but did not participate in the program), husband and wife Jandy and Andy Rodriguez, Fatima Rodriguez, and Virgen Nunez.

At the ceremony, Rick Dunn, B&B’s executive vice president, credited the team at Northern Essex.  “They have been terrific partners in helping us to execute our strategy.”

Also speaking at the graduation ceremony were Newburyport Mayor Donna Holaday and George Moriarty, NECC’s executive director of corporate and community education who recognized the 60 plus jobs B&B has created over the past few years.  NECC Workplace English teacher Patrick Liu presented certificates to each of the graduates and Dennis Marcello attended representing Senator Kathleen O’Connor Ives.

For more information about Workplace English and other corporate training programs offered by NECC, contact Moriarty at gmoriarty@necc.mass.edu or 978 659-1224

NECC’s Center for Corporate & Community Education located at NECC Riverwalk, 360 Merrimack St., Lawrence, Bldg 9, offers noncredit business, professional, career, and personal development courses as well as professional certificates and computer training for individuals and companies looking for cutting-edge skills, by providing the training that is most needed in today’s workforce. For more information email noncredit@necc.mass.edu or call 978-659-1200 or visit us online at www.necc.mass.edu/noncredit.