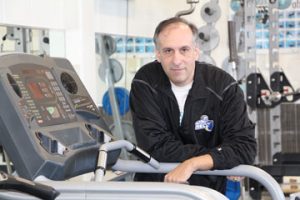 Nelson Desilvestre has been pretty much on the run since the third grade. Now the Beverly native brings his 40 years of track and field experience, as both a participant and a coach, to Northern Essex Community College’s co-ed track and field team.

“We are very excited to have Nelson on our staff here at NECC,” said Northern Essex Athletic Director Sue MacAvoy. “Nelson has a great deal of experience behind him with coaching and officiating track and field. He knows the Merrimack Valley very well which will help in recruiting.  We are very much looking forward to seeing this track program rebuilt and we think Nelson will be the one to do it.”

Inspired by the athleticism exhibited by the 1976 Olympians during the games in Montreal, Canada, the then 10-year-old Beverly grade-schooler laced up his own running shoes. Desilvestre started competing in Beverly YMCA’s youth track meets and was taken by the way it made him feel.

“I found I like speed. I like running fast. I like the feeling of running fast,” he says. “It came easily to me. It was a natural fit.”

His running career continued in junior high school where he ran spring track for two years preparing him for a successful run at Beverly High School. He graduated in 1984, but not before making a name for himself as a standout athlete. In 2011 he was inducted into the Beverly High School Hall of Fame.

Following high school graduation, Desilvestre took his talents to the University of Maine where he continued to run indoor and outdoor track while earning his bachelor’s in economics. By graduation, he was one of the top 10 performers in the triple jump in the university’s history.

Over the years, Desilvestre has continued to compete at the masters level – primarily in the Bay State Games. Married and the father of three grown children, when he is not competing, he operates Topsfield based SI-TECH, INC., one of the oldest silicon brokerage firms in existence.

With all his experience, it seemed natural for Desilvestre to turn to coaching. He has been coaching high school track for more than 23 years. A total of 18 years as head boys’ track coach at Beverly High School. For the last four years he has been the co-head winter track coach at Manchester-Essex Regional High School.

As successful as he has been as a high school coach, Desilvestre always wondered about coaching at the college level. He no longer has to wonder. He accepted the position earlier this month and has already started recruiting.

“I’ll be working with an adult population now,” he said. “I anticipate the level of commitment will be higher.”

In addition to a high level of commitment, he said, he looks for everyone’s best effort and personal goal.

“It’s all about finding out where you are at and improve on that while having fun,” He said. “I want them to have a positive experience here and take it with them for the rest of their lives.”

DeSilvestre will have open office hours for prospective spring track and field participants on Wednesdays beginning January 4 in the Sport and Fitness Center on the Haverhill campus.