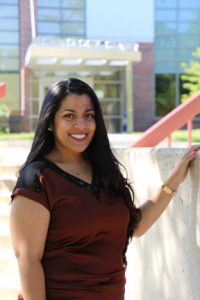 Methuen resident Karina Calderon was the recipient of the Moore Family Scholarship.

The only thing more impressive than Karina Calderon’s work schedule and Northern Essex Community College course schedule is her sticktuitiveness and work ethic.

The Methuen woman attends Northern Essex full time where she maintains a 4.0 GPA, works full time as a referrals coordinator for Conlin’s Pharmacy in Methuen, and raises her 17 and 9 year-old daughters as a single mom.

The 34-year-old business transfer major was recently recognized for her resilience with the Moore Family Scholarship. She was one of more than 200 NECC students, 36 from Methuen, to share more than $200,000 in scholarships.

“This was such an awesome surprise,” she says. “It is so nice to be recognized for your hard work and I’m always worried about there not being enough financial aid to pay for my classes…it’s one of my biggest fears…that I will have to stop going to school because I won’t have the money to pay.”

Calderon’s life today is very different than the life she imagined growing up in the Dominican Republic where she was educated. She had completed three years of architectural college before moving to the United States at 21. Calderon was familiar with the U.S., having visited and worked at Hampton Beach for two summers. After her last visit she was encouraged by her family, who had fallen on difficult financial times, to stay in the United States.

Leaving her two-year-old daughter in the care of her mother, Calderon did stay. She moved in with a distant relative and was lucky to secure a job as a waitress. Luck shined on her again when a frequent customer to the restaurant hired her as a receptionist for his mortgage company. A quick study, she was soon promoted to loan processor. She worked there for three years, during which time she married and added another daughter to her family.

With the recession looming, Calderon dared to think about furthering her education and enrolled in a computer drafting and design program. As finances became tighter, she placed her education on hold and accepted a position as a bank teller with Bank of America which segued into a position as a sales and service associate. Later she worked as a customer service representative for U.S. Airways.

Wishing to be closer to home, she eventually accepted the position of customer service representative for Conlin’s Pharmacy. Today she is the referrals coordinator.

In the fall of 2015, she again ventured into the world of academia enrolling in a business program at Northern Essex. With the help of financial aid and a Retention Scholarship, she has been able to enroll in four courses each semester including the summer semester.

“I knew it was time for me to earn a college degree,” she says. “I thought I could draw on my work experience and enroll in a business program.”

Now that she has started, Calderon is competitive with herself. She is determined to finish her Associate Degree in Business Transfer by the end of next summer and graduate with a 4.0 GPA.

She is so dedicated to her studies that one night, while on her way to class she was involved in a fender bender. She thought perhaps her luck had run out, but as it happened, the vehicle carried brothers from a religious order. After she explained she was on her way to take a statistics quiz, the brothers insisted on encircling her and praying for her success. She aced the quiz.