Community Partnerships Contributing to the Revitalization of Downtown Lawrence and Haverhill 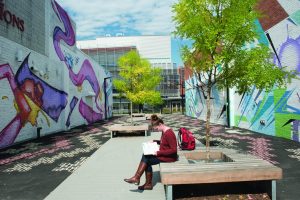 On a recent warm September morning, Adelia Purdy of Amesbury, a Northern Essex medical assistant student, was studying under the shade of a honey locust tree outside the college’s Dr. Ibrahim El-Hefni Allied Health & Technology Center in Lawrence.

Just a year ago this now clean and beautifully-landscaped space connecting the El-Hefni Center with Essex Street was far less welcoming.  Neglected for years, it was clogged with weeds, strewn with trash and broken glass, and the buildings were covered in graffiti.

Its transformation is a perfect example of how Northern Essex’s positive impact goes beyond its campuses, dramatically improving the quality of life in the communities it serves.

When the $27 million El-Hefni Center opened in 2014, it was a boon for downtown Lawrence.  Its sleek contemporary styling was a definite improvement over the dilapidated three-level parking garage it replaced.

With the help of the college, the city of Lawrence applied for and received a $900,000 grant from MassWorks, a state program that supports local redevelopment efforts, to clean and renovate the space connecting the building to Common Street, the commercial center of Lawrence.

Bench style seating, contemporary lighting, colorful wall murals, and a fresh pavement with a graphic pattern now invite Northern Essex students as well as the public to sit, relax, and enjoy the city. 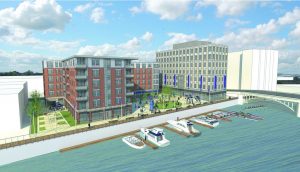 “When people walk through our downtown area, they no longer see trash-filled alleyways – they see areas where they can sit and have lunch with co-workers and friends or read a book in the sun,” said Lawrence Mayor Dan Rivera.  “This is an improvement on the quality of life in Lawrence.”

Northern Essex also hopes to have a role in the revitalization of downtown Haverhill which will celebrate the opening of Harbor Place, a mixed-use development, at the intersection of Route 125 and Merrimack Street this fall.

Thanks to the college’s partnership with HC Media, communications students will take their broadcast journalism classes in the state-of-the-art television studios located on the first floor of Harbor Place.

As President Lane Glenn recently told the Haverhill City Council, “it will be just like 30 Rock”  referring to 30 Rockefeller Plaza in New York home of NBC studios.

The college is also exploring offering a hospitality and culinary arts program in downtown Haverhill in partnership with Whittier Regional Vocational Technical School and Endicott College.

“Our downtowns are the heart center of our communities,” said Glenn.  “And Northern Essex wants to be a part of their revitalization.”